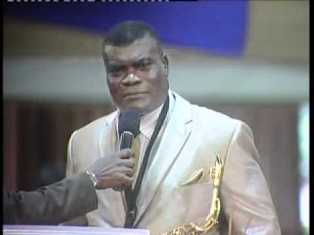 Uti, who reigned in the wrestling world in the 80s to 90s, is facing a two counts of the murder his wife, Toyin Uti and abandoning her dead body in their apartment.

He was accused of  beating the deceased to death, at their residence, 17, Oremeji Street, Ilupeju, Lagos, on October 10, 2017.

Count one of the charge against him read, “that you John Eke Uti, on the 10th day of October, 2017, at about 10.25 am, at 17, Oremeji Street, Ilupeju, Lagos, in the Lagos Magisterial District, did unlawfully killed one Toyin Uti, aged 38, by beating her to death and thereby committed an offence contrary to section 222 and punishable under section 223 Cap C17, Vol. 3 of the criminal laws of Lagos State of Nigeria, 2015”.

While  Count two reads, “that you John Eke Uti, at the same date, time and place, in the Lagos Magisterial District, did disrespect the corpse of one  Toyin Uti, aged 38, by abandoning the corpse in a room to decompose and thereby committed an offence contrary to and punishable under section 165(a) Cap C17, Vol. 3 of the criminal laws of Lagos State of Nigeria, 2015”.

Though, his plea was not taken, but his lawyer,  I. E. Mkoemekor, pleaded with the court, to consider section 224 of the Administration of Criminal Justice Law of Lagos State, 2015, to look into the case file, where it will be discovered that his client is not link with the deceased death.

He also pleaded with the court to admit the former wrestler to bail in a very liberal term.

The Presiding Magistrate, Mrs. B. O. Folarin Williams, while citing Section 224(5) of ACJL of Lagos state, said she would declined to grant remand application argued by the police prosecutor, Sergeant Jimah Ishegele, on the ground that the former world wrestling champion was not linked with the death of the deceased.

The magistrate said, “I have read the case file,  non of the witnesses listed said that the defendant killed her wife.

“Even, the Police Investigation Officer (IPO) could not establish that the defendant killed the deceased.

“I’m not going to grant the remand application, I will grant bail to the defendant, and send the case file to the DPP for advice.

“Consequently, I hereby admit bail to defendant in the sum of N500, 000 with two sureties. The sureties must be gainful employed in reputable companies.”

The matter has been adjourned till November 15, 2017, for report on DPP’s advice.

The magistrate however ordered that the former wrestling champion be remanded in prisons custody pending when he meets the bail conditions.