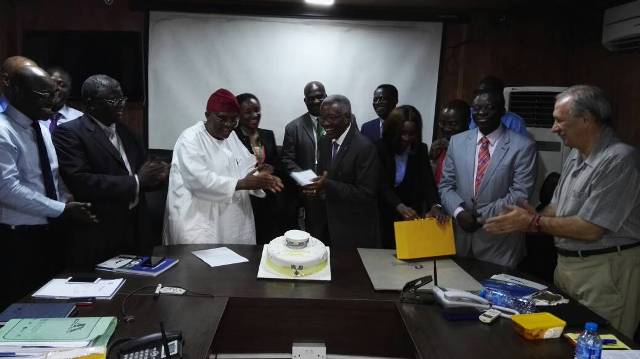 * After a meritorious Service, Captain Chris Ojugbana yesterday finally took a bow as Medview Airline Safety Manager. The photo gallery shows Medview Airline CEO, MUNEER BANKOLE and members of the management team at the send forth ceremony at the Company HQ in Lagos Sent from my iPhone

He is a native of Delta State

He attended St. Patrick’s College where he obtained WASC

He later proceeded to Federal College of Education, Asaba in Delta State Where he read Electrical/Electronics.

His passion for flying made him to proceed for Pilot’s training program at Nigeria College of Aviation, Zaria, Boardman flight Academy USA, and Flight Safety (Int’l) USA where he received both his Commercial Pilot License and Airline Transport Licence respectively.

During the course of his working career, he had opportunity to have attended series of aviation trainings and courses both in Nigeria and in overseas. His working career spans over three decades.  One of which he is opportuned to work in CAA as Deputy General Manager, Operations & Training.

He also worked in Belview Airline between 2007 – 2009 as Manager, Flight Operation Quality Assurance. He proceeded to First Nation Airline between 2009 – 2013 as Quality Manager, Operations.

He is Married with four kids

Be the first to comment on "Citation Of Capt. Chris Ojugbana As He Bows Out Of Med-View"