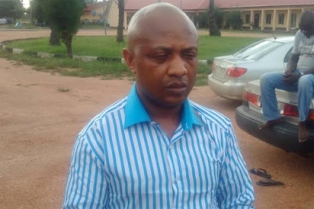 The scheduled  arraignment of the suspected  notorious kidnapper, Chukwudumeme Onwuamadike, popularly called Evans and four members of his gang, at an Igboosere High Court in Lagos,  was stalled today .

The arrangement of the accused persons was  stalled due to application they filed, challenging the court’s jurisdiction to entertain the  case of illegal  possession of firearms levelled against them by the Police

Evans and his gang are facing two separate charges of conspiracy, murder, attempted murder, kidnapping, possession of firearms and selling of firearms.

Precisely, Evans and three members of the gang, namely: Joseph Ikenna Emeka, Chiemeka Arinze and Udeme Frank Upong, are facing seven counts charge in a charge marked LD/5694/2017,while in another charge, Evans and his soldier accomplice, Victor Nonso Aduba are charged with a four-count charge bordering on conspiracy, possession of firearms, kidnapping and murder.

Upon the arrival of the accused persons in court today and before the charges were read to them, Evans’ lawyer, Olukoya Ogungbeje, informed the court of his client’s pending application, challenging the court’s jurisdiction.

Ogungbeje told the court that the charge against his client was only served on him this morning.

He said though, upon getting the hint that his client would be arraigned today, he had filed an application before the court, challenging the court jurisdiction to entertain the charge and take his client plea.

However, the Lagos State Director of Public Prosecution (DPP), T. K. Shitta-Bay, urged the court to discountenance the application on the ground that the business before the court is arraignment of the accused persons, adding that the application filed by Evans’ counsel is not ripe  for hearing.

Shitta-Bay told the court that the prosecution had done what is in conformity with the  law by serving Evans personally with the information of the charge.

She said the charge was served on Evans on August 20, 2017, while in police custody.

She consequently urged the court to discountenance the application and take the plea of the accused persons.

But the Presiding Judge, Justice Oluwatoyin Taiwo, in her  ruling stated that the defence have right to respond to the counter-affidavit filed by the prosecution on point of law.

Evans, and four members of his gang were charged before the Court, on a seven-count charge bordering on conspiracy, attempted murder, murder, kidnapping, and sale and transfer of firearms, in one charge. And another four counts charge in another charge.

The police alleged that Evans and his group had on aut27, 2017, at about 22pm, conspired among themselves to commit felony to wit: kidnapping, attempted murder, murder, possession of firearms, sale and transfer of firearms.

They armed gang were alleged to have kidnapped one Oboianodo Vincent and well as killed one Chijoke Ngozi.

The offences are contrary to and punishable under sections

While the allegation of possession of firearms And Section 9(2) and Punishable under Section 27 (b) (iii) of the Firearms Act, Cap F28, Laws of the Federation ofNigeria, 2004.