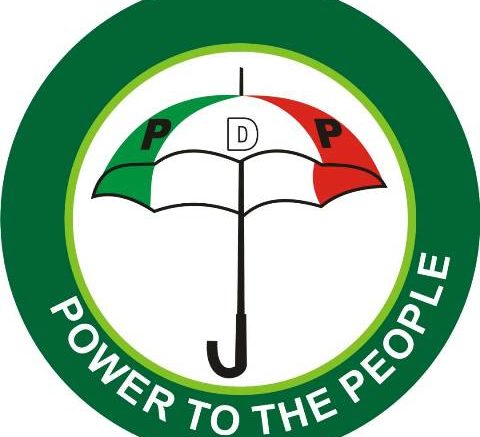 Following a petition written by the National body of People’s Democratic Party (PDP), against Justice Ibrahim Buba of a Federal High Court, Lagos, the judge on Friday, excuse himself from hearing a suit seeking to stop the upcoming congress of the Ogun State chapter and the national Convention of the party.

Precisely, Justice Buba particularly withdrew himself from hearing a suit filed by the PDP Ogun State delegates to the party’s National Convention against the Independent National Electoral Commission (INEC) and 31 others.

The plaintiffs had approached the court for a declaration that in the light of the provisions of Section 223, 224 of the Constitution of the Federal Republic of Nigeria 1999 as amended, Article 33(1) of the PDP Constitution 2012, as amended, the subsisting and binding judgement of the court, made on June 24, 2016, in suit number FHC/L/CS/636/2016, and subsisting and binding order of the court made on August 10, 2017, in suit number FHC/ABJ/CS/701/2017, the second to fifth defendants can not validly prevent them and other delegates of the party from Ogun State, listed in the schedule attached to its originating summons from participating as the delegates to the PDP national convention scheduled to hold on December 9, 2017, or any other date.

The plaintiffs had also sought for an order of injunction restraining the first defendant (INEC) from countenancing or recognising any disciplinary action taken by second to fifth defendants to prevent them and other delegates of the party from Ogun State listed in the schedule attached to the originating summons from participating in the PDP national convention scheduled to hold on December 9,2017, or any other date during the subsistence of the tenure of office of the Ogun State Executive Committee-led by Engineer Adebayo Dayo, by any means whatsoever, including by suspension and or expulsion from the party and many others.

At the last hearing of the matter, Justice Buba had ordered the plaintiff to put the defendants on notice and subsequently adjourned the matter till today for hearing.

However, at the resumed hearing of the matter today, Justice Buba informed the parties in the suit of his decision to withdraw from adjudicating on the suit.

Justice Buba said his decision was based on the petition written against him by a party in the suit.

Consequently, the judge told the parties that the case file will be return to the Chief Judge of the court for re-assignment to another judge.

A copy of the petition captioned ‘petition against handling of suit FHC/L/CS/1556/17, Adeyanju and Others Vs. INEC, PDP and Others by Hon. Justice Ibrahim N. Buba’, dates October 18, 2017 and signed by National Vice Chairman, South-west, Dr.  Eddy Olafeso, which was availed to Abelnewsng.com, reads, “We are constrained to write petitioning against the handling of the above suit by Hon. Justice Ibrahim N. Buba, at the Lagos judicial division of the court.

“Justice Buba has been the one handling most sensitive cases against the PDP and has been severally favoured a section of our members, who are bent on frustrating the smooth operation of the party. We are particularly concerned about his penchant for unfavourable ruling/judgment most of which are eventually upturned on appeal at Appeal and Supreme Courts, but not without the initial damage to the party. Examples are: FHC/L/CS/636/2016: Dayo and others Vs. INEC and Others: FHC/L/CS/605/2016, Otemolu and others Vs. INEC and others, which subject of on-going appeals in CA/L/864/2016 (PDP Vs. Bayo Dayo and others), CA/L/863/2016, (PDP Vs. Pegba Otemolu and others: on the subject matter of the instant case.

“In view of the foregoing that we appeal to you, and in the interest of justice and fairness, to cause this suit be assigned to another judge in Lagos Division of the Federal High Court, as we have lost confidence in Hon. Justice Ibrahim N. Buba”.

Reacting to the judge’s action, Lawyer to the PDP, Dr. Yemi Oke said, “in respect to a matter newly filed in this court, there was an order seeking to stop the forthcoming convention of PDP, Justice Buba had earlier granted the order Ex-parte but later reversed himself and asked the plaintiffs to file appropriate motion and the processes should be served in Abuja outside jurisdiction from Lagos, the judge now give two day by abridging the time at against 14 days to hear the motion.

“We came to court today, the national body of PDP had written a petition to the court’s Chief Judge, the party copied me as their counsel saying they never had it well with Justice Buba and that Justice Buba has been granting questionable judgement and orders against them.

“There is a particular matter they are talking about which Justice Buba  had given a judgement but excluded counsel appointed by Ahmed Markarfi, the authentic chairman of PDP, that one is on appeal.

“A lot of things have happened in the past in this particular court, as far as it concerned PDP in Nigeria, Ogun State and Southwest, they are not comfortable with Justice Buba, they now put it in writing copied Justice Buba himself, the Administrative Judge of this court and the Chief Judge of Federal High Court, this I bring to the attention of the court today.

“When we appeared in court today, the judge mentioned that a petition had been  written against him that he has been unfair to PDP, and that he is a busy judge and do not want to be seen as being bias. As a result of that on his own volition gave a ruling that he is transferring the case file to the Chief Judge for reassignment to another judge.

“What that means is that no order stalling the Congress in Ogun State and the PDP National Convention and that the party can continue to have it’s Congress and Convention”.

In contrary, lawyer to the plaintiffs, Mrs ufoma Esom, described the defendants’ petition against the judge as blackmail and gang-up against the judicial officers.

She said, “what happened today is a blackmail by some politicians against the judiciary, it has been happening and this is not good for this country.

“What we see in court today is that politicians have gang up against the judiciary, just to stop the judge from doing his job.

“We are in a situation where court had given a judgment determined who the real executive of the party in Ogun State are and some other people felt that they are above the law and they decided to do things that were contrary to the judgment of the court.

“When we came before the judge some days back, the judge said he will not granted any Ex-parte and that he will want to hear other side, now these people became jittery and employed the weapons they know best by gathering people to protest against the judge, to write petition against a judge who had done nothing other than saying ‘i wants to hear part of your story’.

“It is that petition they brought today that made the judge to say let the Chief Judge determined who will hear the suit”.

Be the first to comment on "Ogun PDP Crisis: Judge Withdraws From Suit Over Petition"