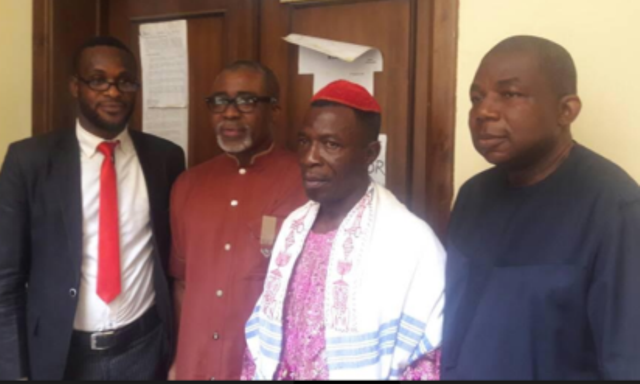 …Adjourns Case To Nov 20, As FG Applies For Warrant Of Arrest

The Federal High Court in Abuja today, ordered Senator Enyinnaya Abaribe, a Jewish High Priest, Emmanu El-Shalom Oka BenMadu, and an accountant, Tochukwu Uchendu, to appear before it on November 20 to explain the whereabouts of the leader of the proscribed Indigenous People of Biafra(IPOB), Nnamdi Kanu.

The court maintained that the trio who stood surety for the IPOB leader, must produce him for continuation of his trial, or face jail term/forfeiture of their bail bond.

The order which was made by trial Justice Binta Nyako, followed Kanu’s absence in court to take his plea to an amended five-count treasonable felony charge the Federal Government preferred against him and four other pro-Biafra agitators, Chidiebere Onwudiwe, Benjamin Madubugwu, David Nwawuisi and Bright Chimezie. Justice Nyako had in a ruling on April 25, released Kanu on bail after he had spent a year and seven months in detention, though the court Okayed his co-defendants to remain in prison custody.

To secure Kanu’s release, Abaribe, who is representing Abia South Senatorial District, El-Shalom and Uchendu, on April 28, signed an undertaking to always ensure the presence of the defendant in court for his trial.

However, at the resumed sitting on the matter today, government lawyer, Mr. Shuaibu Labaran, drew attention of the court to Kanu’s absence, even as he applied for a bench warrant to be issued against him.

FG equally urged the court to summon Abaribe and the other sureties to show cause why they should not be committed to prison with their N100 million bail bond forfeited.

In opposition to the application, Kanu’s lawyer, Mr. Ifeanyi Ejiofor, told the court that his client had been missing since September 14, when he said soldiers invaded the IPOB leader’s family compound at Afara-Ukwu village in Umuahia, Abia state.

“I cannot tell my lord whether he is dead or alive bevaise 28 people were killed at his house”, Ejiofor added.

He told the Judge that he has a pending suit that is asking the Nigerian Army to produce Kanu before the court either dead or alive.

“As it stands today, I don’t know where my client is. They are in a better position to tell us where he is,” Kanu’s  lawyer said.

At that juncture, Justice Nyako asked if any of the three sureties were present in court.

In response, Abaribe’s lawyer, Ogechi Ogbonna, announced his appearance and informed the court that his client had not seen or heard from Kanu since September 11.

Ogbonna told the court that his client was no longer willing to continue as Kanu’s surety and had filed a motion to be discharged. Nevertheless, Justice Nyako said she would not entertain Abaribe’s application until he produced Kanu before the court.

“No! He remains a surety until he produces the defendant. It is only when the 1st defendant is here that he can withdraw and the bail of the defendant revoked”, the judge insisted.

The trial Judge said there were three options available to Abaribe in the matter.

She said, “I will give you three different scenarios available here for your client. He should produce the defendant and apply to withdraw. “Or he could say I don’t know where the defendant is and I cannot produce him, take my bail bond.

“The third scenario is he can say give me time to produce him. These are the only options for your client”.

Abaribe’s lawyer accepted the third option, saying his client would try to ascertain the whereabouts of the IPOB leader.

In her ruling, Justice Nyako ordered the three sureties to appear before the court to show cause why bench warrant should not be issued against them.

“The second surety, Abaribe, will only be rescued when the defendant is produced or if he choses to forfeit the bail bond”, Justice Nyako held.

Sequel to an application by Mr. Maxwell Okpara, counsel to the 4th defendant, Nwawuisi, Justice Nyako ordered prison authorities to grant the defendant access to his private medical doctor.

The case was subsequently adjourned till November 20. Meantime, Kanu’s co-defendants had through their various lawyers, applied for separate and accelerated trial.

They expressed fears that unknown whereabouts of the 1st defendant would affect the expeditious determination of the charge against them.

Meantime, Abaribe had in his application that has FG as the 1st respondent, said he “lacks capacity to produce a person stated by the 1st Respondent to be a member of a terrorist organisation, or any person whom the 1st respondent is reported to be interested in his whereabouts including the aftermath of the military operations in Abia state, which commenced about September 11, 2017”.

As well as, “An order discharging the bond executed by the applicant for the bail of the 1st Defendant/2nd Respondent in charge No. FHC/Abj/CR/383/2015: Federal Republic of Nigeria v Nnamdi Kanu, Chidiebere Onwudiwe, Benjamin Madubugwu, David Nwawisi and refunding the sum of N100, 000, 000.00 (one hundred million naira only) or any other sum paid into this honourable court or undertaken to this honourable court sequel to the bail of the 2nd respondent”.

FG has already filed its own counter motion where it insisted that the federal lawmaker, having vouched for the IPOB leader, must produce him before the court for trial.

Speaking to newsmen after the proceeding, Chidoka, who is a gubernatorial aspirant in Anambra state, urged the National Assembly to investigate what transpired during the Operation Python Dance II the Army conducted in the South East.

Chidoka said he did not believe there was any form of insurrection in the region to warrant deployment of soldiers by FG.

On his part, Fani-Kayode asked the Nigerian Army to produce Kanu, who he said was only fighting for his constitutionally guaranteed right to self determination.

“It is very clear to us that something must have happened to him and I am deeply concerned. If he is indeed in custody of the Army, they should let us know. If he is dead, let them release his dead body. I call on the Nigerian military to stop this charade. If Kanu is with you, please release him. The allegation that 28 persons were killed by the military in Kanu’s compound is unacceptable and I say shame on those that may not know Kanu but hear about all these allegations and still stay on the fence. I say shame on them. We are men of courage and we are here today”, Fani-Kayode who wore Igbo chieftaincy attire with a matching red cap, added.

Kanu is facing four out of the five count amended charge that borders on treasonable felony, criminal conspiracy and alleged illegal importation of radio transmitters into Nigeria for the dissemination of hate messages.

FG, among other things, alleged that Kanu had “on or about the 28th April, 2015 in London, United Kingdom did in a broadcast on Radio Biafra monitored in Enugu, Enugu state and other parts of Nigeria within the jurisdiction of this honourable court, referred to Major General Muhammadu Buhari, GCON, President and Commander in Chief of the Armed Forces of the Federal Republic of Nigeria as a paedophile, a terrorist, an idiot and an embodiment of evil, knowing same to be false and you thereby committed an offence contrary to section 375 of the Criminal Code Act, Cap C. 38 Laws of the Federation of Nigeria, 2004″.

Be the first to comment on "Biafra: Court Orders Abaribe, Jewish Priest To Produce Kanu Or Face Jail"