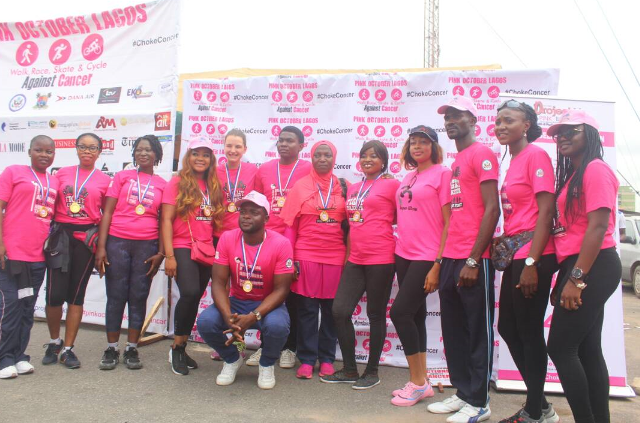 * The Communications Manager of Dana Air, Kingsley Ezenwa (middle )with some cancer survivors, celebrities and team members of Project PinkBlue

The partnership is part of the airline’s Corporate Social Responsibility(CSR).

The 5km cancer walk which kicked off at LTV Arena, was led by breast cancer survivors, celebrities, officials of the Lagos state government and US Embassy in Nigeria.

Commenting on Dana Air’s support to the fight against cancer in Nigeria, the Communications Manager of Dana Air,Mr Kingsley Ezenwa said, “Breast cancer is said to be one of the deadliest of the cancers affecting women and having constantly supported this fight against cancer for the past four years, only shows our commitment to the well being of our people.’’

He stated  further that, ‘’the response today has been fulfilling and we are delighted to have touched many lives positively with our constant support and commitment to this fight against cancer in Nigeria. The whole essence of our support is to assist people to have access to the various  screenings available free of charge and basically to ensure that more and more people are aware and to preach early detection.”

Also speaking at the event, The Executive Director of Project Pink blue, Mr Runcie Chidebe said, most Nigerians don’t go to the hospital except they are carried to the hospital.

This, he said is a serious issue because some cancers do not show or have any symptoms,citing the case of cervical cancer, which he said does not show any symptom till it’s at later stages III or IV.

According to him, “We have a strong believe that we can defeat cancer but we require the right support and Dana Air has led the way by constantly supporting this fight and we urge others to join this fight as this way, we can win the flight.’’

Dana Air has since inception been involved in a lot of charitable projects as well as providing supports for Non Governmental Organisations(NGO) that share same objectives.

The airline has also bagged an award as airline with the best corporate social responsibility policy in the nation’s aviation industry for dedicating part of its resources to assisting the public.

Dana Air,having flown over 2.7 million passengers in the last nine years of its operations is one of Nigeria’s leading airlines with daily flights from Lagos to Abuja, Port Harcourt, Uyo and Owerri.

The airline is reputed for its unrivaled on-time performance, innovative online products and world-class in-flight service.