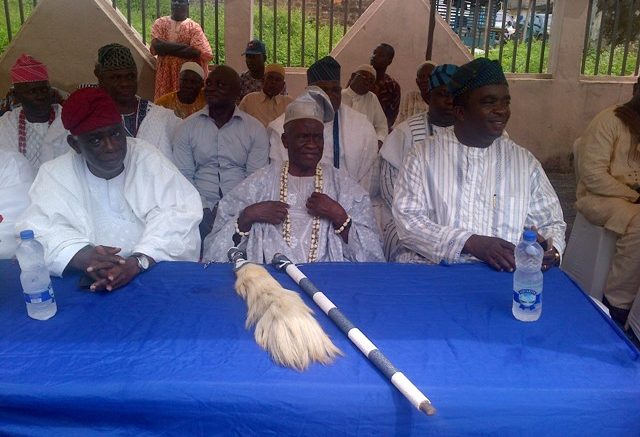 The land of Epe came alive today as the Epe people commenced the celebration of the annual Kayokayo festival that will last for one week.

Kayokayo, which means eat and be satisfied has gone beyond merry making, as it has over the years transformed into a festival celebrated by both Epe people and outside Epe coupled with series of activities lined during the event.

Speaking to journalists at media briefing to herald the festival and what to expect during the period at his palace, His Royal Majesty,Oba Shefiu Olatunji Adewale, the Olu Epe of Epe Kingdom, stated that the history of Epe  and the activities built into the festival had not changed.

The royal father explained that the festival started with a night vigil at Epe Central Mosque on Friday, October 13,2016 to pray that God should make the festival smooth without any hitch and also let the festival grow from strength to strength.

He added that night vigil is to also seek for God’s protection for the Epe people.

Oba Adewale thanked God that all these years of organising the festival the Epe people have not encountered any problem, adding that this year’s event will not be different from the previous ones.

On the impact of the festival has had on Epeland, the traditional ruler hinted that it has helped to create infrastructure such as road , adding that it was  the road constructed by the Lagos State government that made it possible for visitors to come and rejoice with the Epe people.

According to him, “With the construction of these roads, it has made Lagos to Epe very easy.”

The Kabiyesi further stated that the Lagos state government had promised them that companies that could not secure land in Lagos would be coming to Epe, adding that hopefully by this time next year about two or three companies would have moved to Epe.

He said that this is one of the projects that will further open up Epe that the state had embarked on.

According to him, “We thank the Lagos State government for keeping its promise and mandate.”

Going back memory lane, Oba Adewale stated that King Kosoko in 1851 laid the foundation of Eko-Epe when he came with 1,500 people, adding that event has always been commemorated.

He pointed out that later in the day, “we will be at the marine side, in boats, to replicate how Kosoko landed in Epe. The event is a display of culture at its best.” Earlier, the Chairman Kayokayo Planning Committee, who is also the Baameta of Epe Kingdom, Chief Alade Saliu—Okulu stated that the committee was working towards re-branding the festival for both local and international acceptance, adding that already the committee had written to the Lagos state government on the matter.

He added that hopefully next years the committee would have gotten the necessary approval , stressing that on receiving the approval Kayokayo will not only be re-branded,it would also be like the Rio Carnival.

On the provision of security in view of the security situation in the country, Saliu-Okulu stated that the committee was on top of the situation and that the body would not leaving anything to chance.

“We are taking proactive steps to prepare for Kayokayo festival throughout the duration of the event, as we would be having visitors from both far and near,” he said.

Some of the programmes lined up for this year’s Kayokayo festival include: Quranic reading and Islamic competition, youth rally, fashion parade, career talk, horse riding, visit to orphanage homes, football match among others.

The grand finale which has been fixed for Saturday, October 2017, will see on stage a popular Yoruba musician Shefiu Alao alias Baba Oko.

Recalled that Pasuma performed at the grand finale last year.