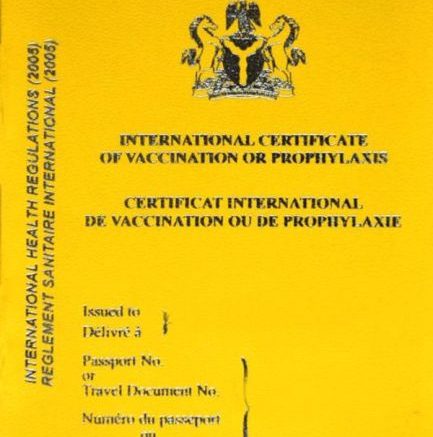 …It Is Not True—Port Health

…Says There Are Enough Cards At Port Health

Passengers travelling through the international terminal of the Murtala Muhammed Airport(MMA),Lagos may not be able to do so due to the nonavailability of  International Certificate for Vaccination  known as Yellow Cards from Port Health Services,a division of the Federal Ministry of Health.

Abelnewsng.com learnt that passengers that have been visiting the Port Health at Lagos Airport for Yellow Cards have not been able to secure the document,which is a must for passengers travelling to countries South Africa, Ghana and Brazil among other countries.

The news platform learnt that the non-availability of the vital document may force the intending passengers to create a scene at the facility, which Port Health may not been able to handle.

When Abelnewsng.com visited the headquarters of the Nigeria Port Health Services, located near the Federal Airports Authority of Nigeria(FAAN)Toll gate , many intending passengers, who had completed the required vaccination processes and could not be issued Yellow cards were asked to come back for collection today ,Wednesday, October 11,2017.

As a result, many passengers could not travel as planned, as they have to shift their flights to another date.

When Abelnewsng.com visited Port Health at about 3:30pm on Tuesday,October 11,2017,some of the intending passengers,who confided in the news medium hinted that they were asked to come back for collection of their cards by 2:00pm  today, Wednesday.

Some of the passengers travelling to African and South American countries  where the presentation of the cards were major requirement at border post for entry, expressed their disappointments over the inability of the Federal Ministry of Health to provide a card  that costs less than N100 to produce but officially sold to passengers at  N1000.

The passengers who expressed the fear of missing their flights because the airlines would not check them in, without the presentation of Yellow Cards, called on concerned authorities to ensure the availability of the essential travel document by today.

When  a follow up visit was made today by Abelnewsng.com very early today ;Wednesday, it was discovered that nothing has changed, as intending passengers and all those, who have come to collect their Yellow Cards after inoculation were seen waiting anxiously discussing in twos and threes.

Reacting,the Director, Port Health Services, Dr. Nike Okoh ,denied that the cards were not available ,stating that the Yellow Cards arrived the facility this morning .

She further explained that what happened was that there are procedures for issuing the travel documents and that there was no scarcity of cards at the facility.

Abelnewsng.com  recalled that issue of Yellow Cards by Nigerians travelling to Ghana and South Africa have generated controversy some times ago.

For instance South Africa in 2012 deported 125 Nigerians over suspicions that their yellow fever certificates were fake.

As a result Nigerian travellers to Accra were subjected to inhuman treatment at the Kotoka International Airport, Accra, over Yellow fever vaccination.

The Ghanaian immigration had presumed that all the Yellow cards  from Nigeria were presumed fake and  as a result the international passports of Nigerians seized.

The Ghanaian immigration officials insisted that the affected persons get Ghana’s Yellow  cards at the cost of N2,000 before their documents could be released to them.