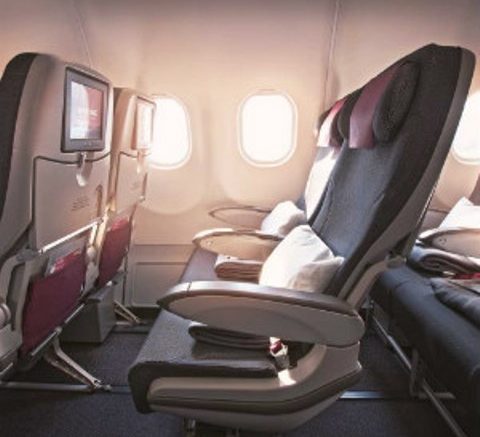 In order to meet rising passenger demand, Qatar Airways said that it has concluded plans to upgrade service on its Seychelles route to an A330 aircraft, starting from October 29,2017.

The upgrade is coming as the award-winning airline prepares to celebrate its one-year anniversary of flying to the Seychelles later this year.

According to the airline,the 260-seater A330 aircraft will increase the airline’s current daily capacity by 130 per cent on this route, connecting Seychelles-based passengers to more than 150 destinations globally.

Speaking on the development,Qatar Airways Group Chief Executive, His Excellency Mr. Akbar Al Baker, said, “Qatar Airways is delighted to be introducing its Airbus A330 aircraft on the route to Seychelles. By providing more capacity on board the A330, we will be able to offer even more passengers from around the globe the opportunity to experience the idyllic white sand beaches of the Seychelles. This enhancement to our offering demonstrates our commitment to the local market and to the many passengers each month who choose to fly to this popular destination with Qatar Airways.”

Recalled that Qatar Airways launched service to the Seychelles in December 2016 and has since contributed to the development of tourism and the growth of local business in the Seychelles.

The Airbus A330 aircraft, which features 24 seats in Business Class and 236 seats in Economy Class, enables passengers to enjoy the airline’s superior entertainment system, Oryx One, offering countless entertainment options.

Business Class passengers, the airline informed can also relax in flatbed seats, offering an unsurpassed standard of comfort on board.

The award-winning airline has received a number of accolades this year, including Airline of the Year by the prestigious 2017 Skytrax World Airline Awards, which was held at the Paris Air Show.

This is the fourth time that Qatar Airways has been given this global recognition as the World’s Best Airline.

In addition to being voted World’s Best Airline by travellers from around the world, Qatar’s national carrier also won a raft of other major awards at the ceremony, including Best Airline in the Middle East, World’s Best Business Class and World’s Best First Class Airline Lounge.

The airline’s hub, Hamad International Airport, is the first in the Middle East to receive an accolade from Skytrax, which only awards the 5-Star Airport rating to airports that achieve the highest overall Quality Performance, recognising the provision of excellent facilities for travellers and high quality airport staff service.

Only six airports in the world hold this prestigious title, including Singapore, Seoul, Hong Kong, Tokyo-Haneda and Munich. Passengers transfer through our hub in as little as 45 minutes, seamlessly connecting to more than 150 destinations on Qatar Airways’ network.

Qatar Airways will be adding many more exciting destinations to its network in 2017 and 2018, including Canberra, Australia; Chiang Mai, Thailand and St. Petersburg, Russia, among others.

The national carrier of the State of Qatar is one of the fastest-growing airlines operating one of the youngest fleets in the world. Now in its 20th year of operations, Qatar Airways has a modern fleet of 200 aircraft flying to business and leisure destinations across six continents.