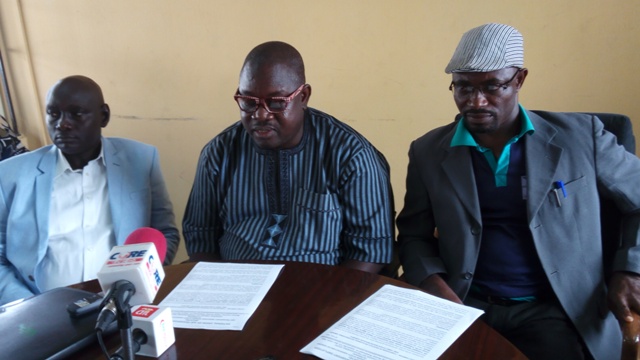 Gentlemen of the Press, we bring you greetings from the entire membership of our Unions and welcome you to this very important press release, as the two most prominent Unions – Air Transport Services Senior Staff Association of Nigeria (ATSSSAN) and the National Union of Air Transport Employees (NUATE) and its ally, the Nigeria Union of Pensioners (NUP) have decided to address the world aviation stakeholders, travelers and fellow Nigerians on the most provocative and confrontational decision being taken against the interest of the Nigerian people, Nigerian aviation workers without any reservation but unbridled arrogance and nonchalant attitude from those appointed to serve the Nigerian people, moreso as someone was quoted to have said that the concession is a foregone conclusion!

How wrong could they be, particularly under a democratic government that is supposed to be an apostle of positive change!! This is not the most credible route for a durable change to ply; perhaps, this is a misconception of direction; or a deliberate affront to our collective sensibility. This process will certainly stunt the heralding to Eldorado of Nigeria aviation industry. This is regrettably NOT ourenvisaged CHANGE!!!

As you are very much aware, civil aviation is a powerful force for progress in our modern global society. A healthy and growing air transport system creates and supports millions of jobs worldwide; forming part of the economic lifeline of many countries. Being a catalyst for travel and tourism, it is world’s largest industry. Beyond economics, air transport enriches the social and cultural fabric of society and contributes to the attainment of peace and prosperity throughout the world.

Twenty four hours a day, 365 days of the year, an aero plane takes off or lands every second somewhere on the face of the earth. In fact, modern aviation is one of the most complex systems of interaction between human beings and machines ever created.

Gentlemen, it is against this background that aviation workers were taken aback when some months ago, we woke up to the proclamation of the Honourable Minister, State, Aviation, to the effect that four major airports, out of the twenty two airports scattered across various states in Nigeria, operated and managed by the Federal Airports Authority of Nigeria, (FAAN) (a parastatal created by Act F5 of 1995) would face concession due to Governments seeming continued failure, lean purse, neglect and or inability to source for required funds to rehabilitate infrastructures and put subsisting facilities to work in our airports.

As proactive, responsive and responsible trade unions, we took up the matter vide a letter to seek clarifications on the import of such policy statement, realizing that such a policy could come without the Minister genuinely consulting with industry players and stakeholders alike.

Yet again, the Act establishing the Federal Airports Authority of Nigeria (FAAN) is not before the National Assembly for review/amendment to accommodate this cloudy delusory concession.

Between then and now, the global communities are aware of this ignoble intention and plan to concession FOUR airports, our national heritage and commonwealth and which are the cash cows of the industry, to “new investors” from God knows where. The problem with us in the sector is not the ability of FAAN to manage its affairs properly and in the wisest of ways, but the continued Ministerial/Official meddlesomeness inflicted on the industry and the pauperization, essentially, of FAAN through several policy somersaults, as no clear policy has been sustained in the last twenty five years, arising from regular change of government and Ministers who initiate “their” own agenda/policies while dismantling existing ones, not minding the success or otherwise of such policies.

How did we get to this point in our national live? How did the Minister get to the “concession model” out of the many models? Where and who was thisdiscussed with? How did we pick concession out of all the models within the Public Private Partnership (PPP) initiative?

Let us pause a minute to analyze, for instance, the so called success story of an aviation (airport) concession, the Murtala Muhammed Airport 2 (MMA2) owned and operated by the Bicourtney Aviation Services Limited, on a Concessioncalled Build, Operate and Transfer (BOT). Notwithstanding the yet to be resolved controversy that still trails the number of years the Terminal shall be operated before it is handed over to government, are Nigerians aware that the same operator/concessionaire is owing and continues to OWE the Federal Airports Authority of Nigeria (FAAN) more than TWO BILLION NAIRA being various fees for services rendered to it by FAAN, in the following order, which could be challenged and or verified by any interested Nigerians or group.

As these magnitudes of debts outstanding against Bicourtney are yet to be settled in favour of FAAN, how then can we guarantee that the Federal Government of Nigeria, through our Ministry will not unleash another monster on FAAN in the name of concession?

Until matters such as this are resolved, aviation Unions shall not rest on their oars and allow these shenanigans to continue.

Should we really and genuinely desire a business model that can fit our expectations, why can we not think of other models such as GREEN FIELD model, which empowers new investors deal on fresh ventures which includes construction of new runways, terminal buildings and so forth to be operated for a specified period of time before it is handed over to government or theCORPORATIZATION model, a process by which government gives the running of the business to a statutory board/agency autonomously carrying out operations of the airport on a purely commercial basis?E.g.Airports Company of South Africa.

Why not allow the airports run as commercially oriented profitable concerns with accountability to shareholders, who may be government agencies or private investors, as we had canvassed for the full commercialization of the Federal Airports Authority of Nigeria long ago albeit without the usual political, ministerial, presidential official meddlesomeness and interference, which has been the bane of lack luster performance and failure of the aviation system in Nigeria?

Nigerian aviation workers have critically analyzed the PPP concept as a veritable vehicle to drive the process of engendering revenue growth, quality service delivery and maintenance of facilities, infrastructures and returns on investment and accepted its workability, if driven with good intentions and in a transparent manner.

Unfortunately for us and given the penchant with which our political class makes pronouncements without deep thoughts, we became deeply worried and hugely concerned about the haste, hush-hush and secret disposition of the Minister in actualizing this contraption without following due diligence as practiced worldwide while we have also observed with grave concern, the deceit and coercion that goes with the current process of concessions, that is lacking in transparency which is hugely required at this moment. What facts were presented to the Federal Executive Council (FEC) for the approval to concession, as due diligence was never followed up to the time the said FEC approval was granted?

For the avoidance of doubt, we posit for the records and place before the world, nagging issues and questions on our concerns, predicament and expectations of what will become and or befall FAAN, which has been able to sustain itself, albeit  under very terrible conditions inflicted on it by government officials?  What lies ahead of FAAN with members of staff totaling SIX THOUSAND TWO HUNDRED AND EIGHTY FIVE in twenty two airports and with their Pensioners totaling FOUR THOUSAND, ONE HUNDRED AND TWENTY FOUR and still counting?.

How do we manage and clear all these cases, while the Minister is busy planning the concessions of our airports, albeit without regard to these existing legal issues?

In the meantime, we hereby inform you all that virtually all revenue generation catchment points have been given out to several individuals on concession, such as car parks, (example is the newly commissioned multi storey car park), fuel dumps, shops, VIP lounges, advertisements etc. What then is remaining for concession?

These are germane issues yearning for proper answers and until we get our answers, we shall continue to talk, protest and even embark on series of industrial actions.However, may we caution the Honourable Minister to disband the discredited Transaction Advisors immediately or be faced with industrial action within the next fifteen days!

Finally, aviation workers and other stakeholders, who truly believe that Nigeria is the only country we shall call our home deserve the very best and are prepared to strive for the very best but we are vehemently opposed to any form of further compromise on the planned concessions of our Airports especially if you consider the security and safety concerns around the world today. Are we prepared in any way?

May we therefore advise that government should kick start this project with one or two underutilized airport(s) as a pilot scheme, which if successful, should be replicated in other (smaller) airports. When these other airports become a success story as envisaged by government, then, and only then can the idea of sharing the big four can be entertained!!!

Thank you very much for being part of this effort to safeguard our commonwealth and protect the future of our unborn generations.

Be the first to comment on "Full Text Of The Statement Issued By NUATE,ATSSSAN,NUP On Concession Of Lagos,Three Other Airports"