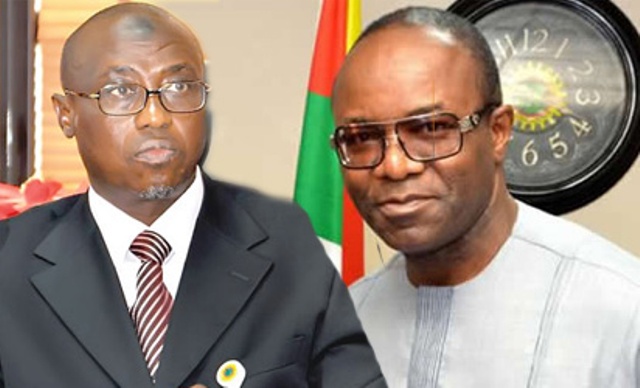 …Says Due Process Was Followed In The Various Activities

The Nigerian National Petroleum Corporation(NNPC), finally break the silence today  describing the allegations of the Minister of State for Petroleum Resources, Mr. Ibe Kachikwu, against its Group Managing Director, Mr. Maikanti Baru, as baseless and exaggerated

This is just as the corporation also accused the minister of  manufacturing figures to give credence to his claims.

Recalled that the Senate had set up committee to look into the allegation which has been described as weighty by many.

The corporation’s response to the allegations was signed by its Group General Manager, Group Public Affairs Division of the NNPC,Mr. Ndu Ughamadu.

The NNPC spokesman insisted that  due process was followed in the various activities, adding that it was established that apart from the Ajaokuta-Kaduna-Kano(AKK) pipeline project and Nigerian Petroleum Development Company, NPDC, production service contracts, all the other transactions mentioned were not procurement contracts.

According to him, “The NPDC production service contracts have undergone due process, while the AKK contract that requires FEC approval has not reached the stage of contract award.”

The corporation contended that from the outset, the law and the rules guiding the NNPC do not require a review or discussion with the Minister of State or the NNPC Board on contractual matters, insisting that what was required was the processing and approval of contracts by the NNPC Tenders Board, the President in his executive capacity or as Minister of Petroleum, or the Federal Executive Council (FEC), as the case may be.

“There are therefore situations where all that is required is the approval of the NNPC Tenders Board while, in other cases, based on the threshold, the award must be submitted for presidential approval. Likewise, in some instances it is FEC approval that is required,”NNPC said in its statement.

The statement equally accused the minister of manufacturing figures  for the various contracts,saying that “It should be noted that for both the Crude Term Contract and the Direct Sale and Direct Purchase (DSDP) agreements, there are no specific values attached to each transaction to warrant the values of $10 billion and $5 billion respectively placed on them in the claim of Dr. Kachikwu. It is therefore inappropriate to attach arbitrary values to the shortlists with the aim of classifying the transactions as contracts above NNPC Tenders Board limit. They are merely the shortlisting of prospective off-takers of crude oil and suppliers of petroleum products under agreed terms. These transactions were not required to be presented as contracts to the Board of NNPC and, of course, the monetary value of any crude oil eventually lifted by any of the companies goes straight into the federation account and not to the company.”

The statement stated that  contrary to the assertion of Dr. Kachikwu that he was never involved in the 2017/2018 contracting process for the Crude Oil Term Contracts,Kachikwu was in fact expressly consulted by the GMD and that his recommendations were taken into account in following through the laid down procedure.

“Thus, for him to turn around and claim that “…these major contracts were never reviewed or discussed with me…” is most unfortunate to say the least,” the statement said.

The contracting process in NNPC, the statemment informed is governed by the following: provisions of the NNPC Act,the Public Procurement Act, 2007 (PPA).procurement method and thresholds of application and the composition of Tenders Board as provided by the Secretary to the Government of the Federation (SGF) Circular reference no. SGF/OP/1/S.3/VIII/57, dated 11th March, 2009,NNPC Delegation of Authority Guide,  Supply Chain Management Policy & Procedure documents and NNPC Ethics Guide.

NNPC, the statement stated had cause to clarify severally from Bureau of Public Procurement (BPP) as to the composition of NNPC Tenders Board and the role of NNPC Board appointed by Government.

It added that in the process the following clarifications were made;

The statement explained that the above clarifications of the provisions of the procurement process show that approvals reside within the NTB and that  where thresholds are exceeded, the NNPC refers to FEC for approval, adding that the NNPC Board has no role in contracts approval process as advised by BPP.

“As can be seen, all these clarifications were sought and obtained prior to August, 2015 and were implemented by Dr. Kachikwu as the GMD of NNPC. Dr. Kachikwu also constituted the first NNPC Tenders Board on 8th September, 2015 and continued to chair it until his exit in June, 2016,” The statement said.

Be the first to comment on "Your Allegations Are Baseless, NNPC Tells Kachikwu"