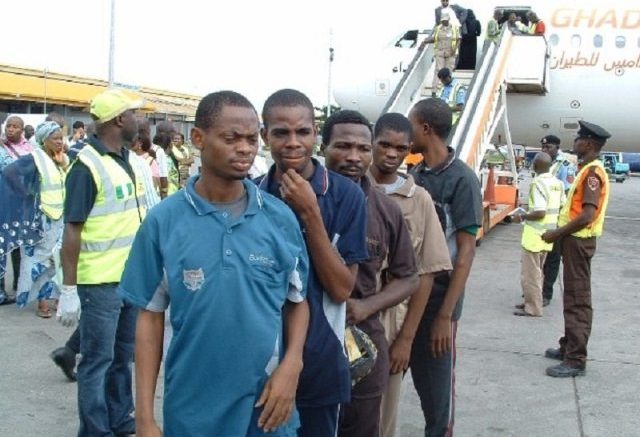 No fewer that 4,281 Nigerians were repatriated from Europe, America and some African countries through the international wing of the Murtala Muhammed Airport (MMA), Lagos in the first half of 2017.

A total number of 691,934 travellers departed through the airport while another 560,988 travellers arrived the country within the period under review.

A document made available to our correspondent through the Ministry of Interior, revealed that the deportees were divided into two namely; chartered and regular flights.

The document informed that between January and June, 2017, 2,251 Nigerians were deported using chartered flights majorly from Libya and a trickle of European countries.

The breakdown of the chartered flights deportees indicated that 1,321 of them were males while the other 930 deportees were females.

Those deported through regular flights, which were mainly from Europe, South Africa and a few African countries were 2,030 Nigerians.

The composition of the deportees revealed that just like in the chartered flights, majority of them were males.

According to the document, males deported in the first half of the year were 1,502 while 528 others were female.

Of these numbers, those involved in criminal activities in their host countries were handed over to the Nigeria Police for further prosecution, some who involved in drug related matters were handed over to the officials of the National Drug Law Enforcement Agency (NDLEA) at the airport while others were returned to the National Agency for the Prohibition of Traffic in Persons (NAPTIP).

The document further revealed that in the first half of the year, 691,954 passengers both Nigerians and foreigners used the facilities at MMIA to depart to various destinations from the country.

Out of these numbers, 519,215 were Nigerians and majorly males while another 179,739 were foreigners departing the country.

Also, within the period, 550,988 passengers arrived Nigeria through the international wing of the Lagos Airport.

The breakdown revealed that 392,237 of them were Nigerians while the other 158,751 were foreigners from various countries.

A source close to the Nigerian Immigration Service (NIS) speaking on the issue said that the statistics were important for the Nigerian government to know the numbers of people entering or exiting the country, adding that this would enable the government to monitor and plan adequately.

Be the first to comment on "4,281 Nigerians Repatriated From Europe,Other Countries In Six Months"