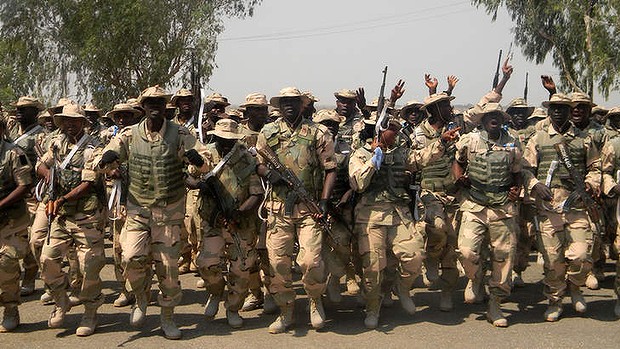 …Say Troops May Invade Communities In The Region

Barely 24 hours after the Nigerian Army commenced the deployment of troops for the ‘Operation Crocodile Smile 2’ exercise in the Niger Delta region,militants in the area have threatened to attack troops if the Army refuse to withdraw its men.

According to NAN  the General Officer Commanding 6 Division, Nigerian Army, Port Harcourt, Major General Enobong Udoh had explained, “Operation Crocodile Smile is not a show of force but a confidence-building patrol that seeks to reassure the people of Rivers State and the Niger Delta that the army is ready to work.”

He said this while addressing troops to signal commencement of the exercise.

According to him, “We are ready to work with other security agencies of government to ensure that there is peace and security.Our operation aims to reassure the public that we are ready to fight crimes like cultism, militancy, and kidnapping so that people can go about their business without fear.”

He also stated that troops would carry out patrols with the Nigerian Police Force, Federal Road Safety Corps, Nigeria Immigration Service and the Department of State Services.

The Six Divisions,Udoh stated would carry out the exercise in Akwa Ibom, Bayelsa, Delta and Rivers states while another formation would cover other states in the Niger Delta.

Following the deployment,militants in the region have threatened to attack the soldiers.

The militants who spoke through the Niger Delta Peoples Democratic Front, contended that the heavy presence of soldiers in Niger Delta was unnecessary.

The Leader of the group, General Playboy made the reaction of the militants known in a statement.

“I am writing this statement as I was coming out of a meeting with members of our group and we believe that the government is trying to make the youths angry with the recent deployment of soldiers in the Niger Delta region. The level of militancy is very low and there is no longer attacks on oil installations in the region. So, we want to know why troops are deployed in the region. Do they want to kill our people the way they killed some Igbo in the South-East, “the statement read in part.

It continued, “We are asking them (troops) to leave our region immediately otherwise we will attack them. We don’t have any problem here and therefore, we do not need the deployment of soldiers.”

On its part, the Pan Niger Delta Forum said it wanted the military authorities to warn the soldiers to  carry out the exercise in  line with the rules of engagement to sustain the fragile peace in the region.

According to the PNDF,Coordinating Secretary, Dr. Alfred Mulade, “Our reaction remained the same. In spite of our appeal, the Federal Government still went ahead to launch the exercise. It is quite unfortunate. What we are doing is in the interest of peace because we believe strongly that the action would be counterproductive. The best approach remains that the community should not be militarised. The only advice we give to them is that although we did not expect them to go ahead with the exercise, they should be guided by their operational tenet and rules of engagement.”

He continued, “They should also respect civil authority so that they don’t harass innocent people in the Niger Delta communities. They should not visit communities to invade and harass people as it was done in the first stage of Operation Crocodile Smile last year. In last year’s operation, tales of woes trailed the exercise. We are not sure that they (military) will abide by their operational tenets by not infringing on people’s rights. We are sure that they will invade communities and harass people to cause tension in the region. What we want is peace and not deployment of soldiers. They must be cautious during the exercise.”

Be the first to comment on "Operation Crocodile Smile 2: Militants Threaten To Attack Troops In N’Delta"