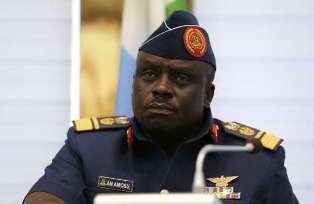 An investigator with the Economic and Financial Crimes Commission (EFCC), Tosin Owobo, yesterday narrated before Justice Mohammed Idris of a Federal High Court in Lagos how the sum of N22.1 billion belonging to the Nigerian Air Force (NAF) was moved to private companies.

He made the revelation while giving  evidence in the on-going trial of a former Chief of Air Staff, Air Vice Marshall Adesola Amosu (rtd) and 10 others over an alleged N22.8 billion fraud.

In his testimony before the court, the witness disclosed that investigations by his team revealed that a staff of Zenith Bank Plc, Mrs. Funke Osisanmi, carried out every debit transactions done on the NAF’s account after receiving instructions to that effect from Air Commodore Gbadebo.

“If debit were to be made from NAF account, she receive instructions from Air Commodore Gbadebo and debit the account following which she liaised with various Bureau De Change (BDC) operators for the conversion of the money to foreign currencies”, he said.

According to him, the BDC’s involved in the transactions includes; Lebol Oil and Gas, Judah Oil and Gas and Right Option Oil and Gas.

The witness said upon interrogation, Mrs. Osisanmi revealed that after conversion, she usually hands over the foreign currencies to either Air Commodore Gbadebo or others officers of NAF.

The witness added that the funds moved to these companies were eventually used to purchase property in Nigeria and abroad for the service chiefs.

On efforts to recover the fund, Owobo said: “We were able to recover some of the accounts that received funds from NAF. The 1st defendant (Amosu)  raised draft and refunded over N2 billion to government coffers. The property were traced and marked. We visited the property in Nigeria and most of them have been handed over to the Asset Management Division of the EFCC after obtaining orders of interim forfeiture from court”.

Further hearing in the matter continues on Thursday.

Be the first to comment on "How Ex-Air Force Chief, Amosu Laundered N22.1B Through Zenith Bank"