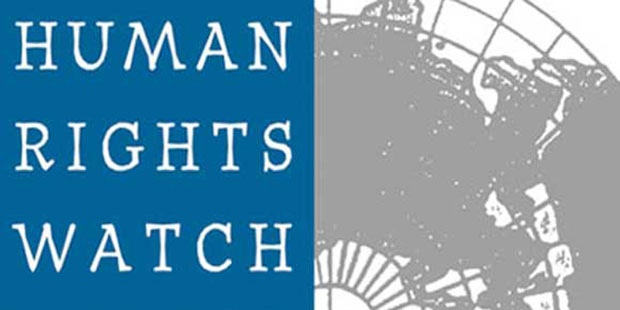 Cameroon’s military has carried out a mass forced return of 100,000 Nigerian asylum seekers in an effort to stem the spread of Boko Haram, Human Rights Watch(HRW) said in a report released today.

According to  HRW the deportations defy the UN refugee agency’s plea not to return anyone to Northeast Nigeria “until the security and human rights situation has improved considerably,” and leaves deportees facing spiralling violence, displacement and destitution.

The 55-page report said, “‘They Forced Us Onto Trucks Like Animals’: Cameroon’s Mass Forced Return and Abuse of Nigerian Refugees,” documents that since early 2015, Cameroonian soldiers have tortured, assaulted, and sexually exploited Nigerian asylum seekers in remote border areas, denied them access to the UN refugee agency and summarily deported, often violently, tens of thousands to Nigeria. It also documents violence, poor conditions and unlawful movement restrictions in Cameroon’s only official camp for Nigerian refugees, as well as conditions recent returnees face in Nigeria.

According to the Associate Refugee Director at Human Rights Watch, Gerry Simpson, “The Cameroonian military’s torture and abuse of Nigerian refugees and asylum seekers seems to be driven by an arbitrary decision to punish them for Boko Haram attacks in Cameroon and to discourage Nigerians from seeking asylum. Cameroon should heed the UN’s call on all countries to protect refugees fleeing the carnage in northeast Nigeria, not return them there.”

In late June and July 2017, HRW interviewed 61 asylum seekers and refugees in Nigeria about the abuses they faced in Cameroon. They said soldiers had accused them of belonging to Boko Haram, a Nigerian militant Islamist group, or of being “Boko Haram wives” while torturing or assaulting them and dozens of others on arrival, during their stay in remote border areas and during mass deportations.

Some said their children, weakened after living for months or years without adequate food and medical care in border areas, died during or just after the deportations, and others said children were separated from their parents.

An asylum seeker who was deported from Mora in March 2017 described how without warning, Cameroonian soldiers rounded up 40 asylum seekers “and severely beat us and forced us onto a bus. They beat some of the men so badly, they were heavily bleeding. When we got to the Nigerian border they shouted ‘Go and die in Nigeria.’”

Refugees who reached Cameroon’s only designated camp for Nigerian refugees, in Minawao, have also faced violence from Cameroonian soldiers.

While they have some protection as refugees, the approximately 70,000 people there have had limited access to food and water and abusive restrictions on their movement. In April and May, 13,000 returned from Minawao to a displacement camp in Banki, just across the border in Nigeria. Some were killed in early September when Boko Haram attacked the camp.

Although UNHCR does not have reliable access to most of Cameroon’s border areas with Nigeria, in early June it said its monitoring partners found Cameroon had forcibly returned almost 100,000 Nigerians to their country since January 2015.

That made Nigeria complicit in the unlawful forced return of its own citizens.

Tens of thousands of deportees from Cameroon end up in insecure militarised displacement camps or villages in Borno State, where conditions are dire and women and girls face sexual exploitation.

These sites are surrounded by the ongoing conflict between Nigeria’s armed forces and Boko Haram, which as of mid-September had displaced almost 2 million other Nigerian civilians.

Cameroon’s forced returns are a breach of the principle of nonrefoulement, which prohibits the forcible return of refugees and asylum seekers to persecution and under regional standards in Africa, to situations of generalised violence, such as in Northeast Nigeria.

Since 2014, Cameroonian armed forces have carried out operations against Boko Haram in the country’s Far North Region.

Cameroon has the right to regulate the presence of non-nationals on its territory, including those proven to be threat to its national security.

The authorities also have an obligation to carefully investigate attacks in Cameroon by suspected Boko Haram members.

However, it may not block refugees from seeking asylum and summarily deport them.

After staying publicly silent on the situation for two years, in late March, UNHCR publicly criticised the authorities for their mass forced refugee returns.

The criticism was triggered by deportations after Cameroon had signed an agreement that month with Nigeria and UNHCR confirming that it would ensure that all refugee return was voluntary.

As  at mid-September, the Cameroonian authorities had allowed UNHCR only to pre-register asylum seekers in some border communities, leaving those pre-registered and tens of thousands of other asylum seekers without access to meaningful protection and putting them at risk of deportation.

The Cameroonian authorities deny any forced return or abuse of Nigerian asylum seekers and have not replied to a Human Rights Watch request for a response to the report’s findings.

“Faced with overwhelming evidence of mass refugee abuse and UN condemnation, Cameroon is trying to bury its head in the sand. But returning tens of thousands of Nigerians to harm and destitution will only further shred its well-deserved reputation as a generous refugee-hosting country,” Simpson said.

Be the first to comment on "Cameroon’s Military Deports 100,000 Nigerians Asylum Seekers"