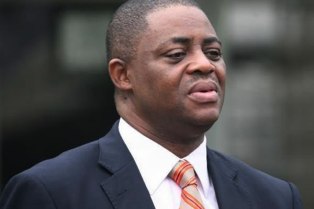 A Federal High Court, Lagos, today dismissed an application filed by Mr. Femi Fani-kayode, a former Minister of Aviation, seeking transfer of a money laundering case against him, to Abuja Division of the court

Fani-Kayode, who was also  the Chairman, Media and Publicity of the Jonathan Goodluck Campain Orgnisation in the 2015 general election, was charged alongside a former Minister of State for Finance, Nenadi Usman.

Also charged was a former National Chairman of the Association of Local Government of Nigeria (ALGON) Yusuf Danjuma and a company, Jointrust Dimensions Limited.

The accused were charged by The Economic and Financial Crimes Commission (EFCC) on 17 counts of alleged N4.6billion money laundering.

They had however, pleaded not guilty to the charges.

The accused were first arraigned on June 28, 2016 before Justice Muslim Hassan of the same court, but the judge withdrew from the suit on March 16, this year, following an application by Fani-Kayode  on grounds of  likely bias.

The case was therefore, re-assigned to Justice Mohammed Aikawa and the accused were re-arraigned on the charges.

At the last hearing of the matter, on June 21, Fani-kayode’s lawyer, Mr Norrisson Quakers (SAN) had prayed the court to transfer the case to its Abuja division, adding that the court lacked jurisdiction to hear the case.

Quakers had argued that the facts of the case showed that all the transactions carried out by the accused while he was the Director of Media and Publicity of the Goodluck Jonathan Campaign Organisation, took place in Abuja.

He also added that the accused resides in Abuja and had another trial ongoing at the Federal High Court in Abuja.

EFCC in objection, by it’s lawyer, Mr Rotimi Oyedepo,  urged the court to refuse the application on the grounds that the transactions as well as cheques and receipts in furtherance of same, were done in Lagos.

He had urged the court to dismiss the application for transfer as a mere waste of time.

Delivering judgement on  the application, on today, Justice Rilwan Aikawa held that some of the authorities cited by defence counsel, were delivered before the enactment of the Administration of Criminal Justice Act, 2015, which he noted had provided exceptions to the issues of venue of court.

Justice Aikawa states: “In the case before me, the prosecution avers in its counter affidavit that “the sum of N30 million was paid to PW1 (Olusegun Idowu) of Paste Posters Company Ltd, who has his office in Lagos”.

“This, in my view shows that all facts leading to the transaction was done in Lagos and only evidence will prove otherwise.

“In the light of all these, it is clear that the facts and circumstances of this case falls into the exceptions of the law regarding criminal trials.

“There is no justification to warrant a transfer of this case to Abuja; the interest of justice requires that the trial of this case continues in this court.

“This application hereby fails and is accordingly dismissed”.

The court also ruled on an objection raised by defence counsel on the last adjourned date, challenging the tendering of photocopies of payment receipts by PW1, who had began his evidence on June 7.

Aikawa held that it was not the business of the court to concern itself with whether a document is original, so long as the document sought to be tendered, is duly certified.

The court accordingly, dismissed the objections, admitted the receipts in evidence and marked same as exhibits 3 and 3A respectively.

The court then called on prosecution to continue with the examination of his first witness.

Led in continuation of his evidence before the court, Oyedepo asked PW1(Idowu): “you told the court that you printed some posters, now take a look at exhibit 3 and tell the court if that is the payment receipt,”

In response, the witness echoed “yes” and added that the amount on the receipt was N6million which payment was made to him in cash and in the name of “Directorate of Media and Publicity, PDP Campaign Organisation”.

The witness added that on the same day, the sum of N30million was also remitted to him in cash in the name of same directorate.

After the conclusion of his testimony, the prosecutor informed the court that he was done with examination in chief of his first witness.

Meanwhile, defence counsel, (Quakers) urged the court to grant an adjournment to enable him study the exhibits and prepare his cross examination.

The court consequently, adjourned the case to September 27 ,(tomorrow) for cross examination and continuation of trial.

In the charge, the accused were alleged to have committed the offences between January and March 2015.

In counts one to seven, they were alleged to have unlawfully retained over N3.8 billion which they reasonably ought to have known formed part of the proceeds of an unlawful act of stealing and corruption.

In counts eight to 14, the accused were alleged to have unlawfully used over N970 million, which they reasonably ought to have known formed part of an unlawful act of corruption.

Meanwhile, in counts 15 to 17 of the charge, Fani-Kayode and one Olubode Oke, who is said to be at large, were alleged to have made cash payments of about N30 million, in excess of the amount allowed by law, without going through a financial institution.

Besides, Fani-Kayode was alleged to have made payments to one Paste Poster Co (PPC) of No 125 Lewis St., Lagos, in excess of amounts allowed by law.

Be the first to comment on "Money Laundering:Fani-Kayode Loses Bid To Tranfer Trial To Abuja"