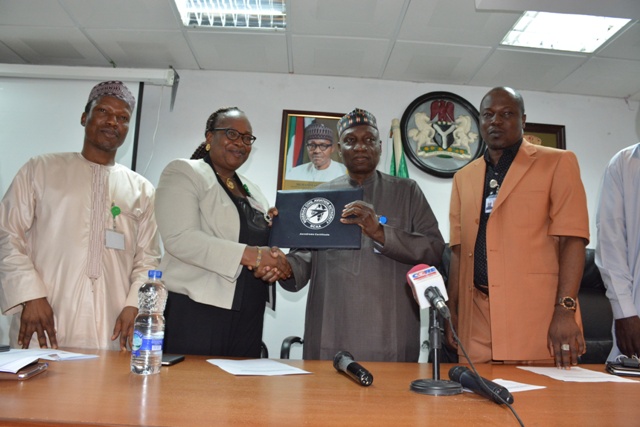 …To Give Letters Of Commendation Certification Team

Recalled that MMA was certified by the Nigerian Civil Aviation Authority(NCAA) last week after 11 years after meeting the conditions set for certification,thereby making it the first airport in the country to be certified.

Speaking at a very brief event to present the certificate to the Airport Manager and her team, the Managing Director of FAAN, stated that the aim of the event is to formally  bring the certificate and present to those it belong  to, adding that it is the first of its kind in Nigeria.

He added that with the certification of MMA , Nigeria has joined airports in the world that have been certified,adding that the certificate was given to FAAN by NCAA last week . Dunoma stated that after FAAN received the certificate, it took it to Abuja ,where it was formally presented to the Minister of State for Aviation ,Sen.Hadi Sirika,adding that it was after that the FAAN management decided to bring the certificate to where it originally belong.

According to him, “We have to take it to where it belong after officially presenting it to the Minister of State, Aviation, Sen. Hadi Sirika. It does not belong to Abuja but to MMA,Lagos.It gives me a great pleasure to present the certificate to MMA,Lagos.”

Going back memory lane, Dunoma stated that the process of securing certification for the airport started 11 years ago and that a lot of efforts were put in place for the feat to be achieved, adding that it was not easy getting the airport to be certified. He disclosed that Abuja was the next target after which Port Harcourt and Kano would follow and that the challenge is no longer certification but how to maintain and sustain it to prevent it from being either suspended or withdrawn by the regulatory body.

In his words,”The certification can either be suspended or withdrawn by NCAA if we fail to sustain it . But we have told NCAA that we are going to sustain it. It will be a serious matter if we cannot sustain it. What this means is that we must re-double our efforts.The same efforts and vigour we use to get this certification must be used to also sustain it.”

He called on staff of the agency to work hard as a team to sustain the certification, assuring that the team from FAAN headquarters would support MMA,Lagos certification  team to ensure sustenance.

In her acceptance speech, the International Airport Manager, Mrs Victoria Shin-Aba, noted that history was made last week Monday and today ;September 25,2017, the formal presentation of the certificate  certifying MMA,Lagos by the managing director of FAAN, thanking God that all those who contributed to achieving this feat are part of the success story and history. She commended Dunoma for his support and opportunity to contribute towards certifying the airport, adding today MMA,Lagos would be counted among the comity of certified airports in the world .

The Airport Manager stated that in the last five years MMA,Lagos Certification Team had sacrificed a lot, adding that though it was rough and tough but that everybody was committed and that they cooperated with her.

According to her, “ We will ensure that the certification is maintained and sustained so that our efforts will not be in vain. As a result ,a monthly joint inspection will be carried out to sustain the certification.”

She appealed to the Managing Director to recognise and encourage the MMA Certification Team,who have worked assiduously by giving them letters of commendation.

She disclosed that already the airport has agreed to support Abuja Airport to secure certification . On his part, the Director of Airports Operation, Capt.Hamisu Yadudu, also commended Dunoma for his support and cooperation, stressing that there was no way it would have been achieved without his backing.

He stated that the Managing Director had already moved a step ahead as it concerns given letter of commendation to the MMA certification Team and that the letters would be issued.

FAAN, he informed was fine tuning the plan to sustain MMA,Lagos certification.

He added that there will also be monthly inspection or visitation to ensure the sustenance of the certification. Be the first to comment on "Certification: FAAN Boss Formally Hands Over Certificate To Airport Manager,Shin-Aba"