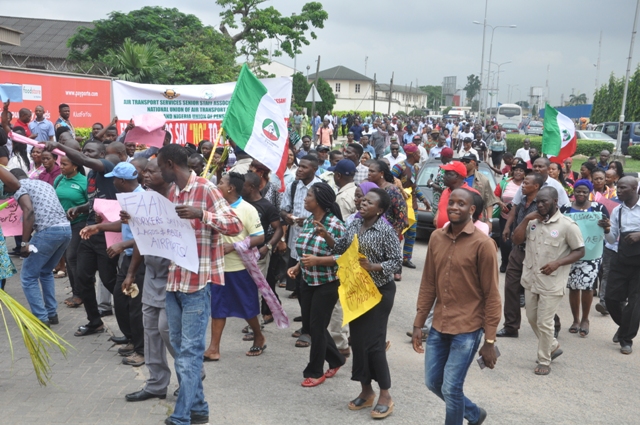 * Aviation unions protesting against the concession of airports along at the Murtala Muhammed Airport(MMA)Lagos.

There was a mild drama at Freedom Square; the meeting point of the aviation unions, when the Air Transport Senior Staff Services of Nigeria (ATSSSAN), National Union of Air Transport Employees (NUATE), Nigeria Union of Pensioners (NUP)  prevented the Association of Nigerian Aviation Professionals (ANAP) from speaking at the gathering to protest the concession of the Murtala Muhammed Airport (MMA)Lagos and the Nnamdi Azikiwe Airport(NAA),Abuja.

At the ground, ANAP was prevented by other unions from making it opinions known, alleging that ANAP was not among the unions that wrote to the management of the Federal Airports Authority of Nigeria (FAAN) that they were going to protest of concession of airports.

Also ,ANAP was not recognised when the names of aviation unions were mentioned at Freedom Square and that led to  protest by its members that were present at the popular workers’ square.

The action led to disagreement among the unions and also created an opportunity for critics of the unions to wonder if these entities were going to protest with a divided house.

Earlier, the unions  had alleged that the concession of the two airports was not transparency, accusing the Minister of State for Aviation, Senator Hadi Sirika of being economical with the truth.

The unions protested to the General Aviation Terminal (GAT) of the Murtala Muhammed Airport (MMA), Lagos and the international wing of the airport and back.

While the protest was on, motorists and commuters could not get access to the terminal for several hours, while some of the commuters, who had flights to catch had to alight from their vehicles and trek to the terminal so as not to miss their flights

Policemen from the Airport Police Command, Nigerian Air Force and FAAN Aviation Security were on hand to ensure that the protest was peaceful. Addressing workers at Freedom Square shortly after the peaceful protest, the President of ATSSSAN, Comrade Ahmadu Illitrus, stated that the union leaders had engaged Sirika on the planned concession of the airports, but without any tangible response.

The ATSSSAN boss noted that the unions’ two members in the steering committee were in the dark about the processes despite their agitations for transparency, but vowed that the plan by the government would not see the light of day.

According to him, “We have every reason to exercise fear, based on the past experience. Concession of MMA2 is one of the worst we can have anywhere in the world. Nobody can tell you exact tenure of this concession with Bi-Courtney. Nothing is being paid to FAAN.”

On his part, the General Secretary, NUATE, Comrade Olayinka Abioye, stated that the unions and the workers in the aviation sector would continue to protest against bad concession in the system.

He said that today’s rally was to sensitise the people and all Nigerians about the alleged sharing of national assets by politicians to themselves and their cronies in the form of privatisation, concession or commercialisation.

He claimed Sirika and his cohorts were planning to establish University of Aviation in Abuja, instead of improving the status of the Nigerian College of Aviation Technology (NCAT), Zaria, with deplorable infrastructure..

Abioye also alleged that Sirika had planned to spend N659 million on the concession exercise, adding that N125 million of the funds is earmarked for overseas travels for Sirika to Dubai and United States.

“About two weeks ago, I received a message that Vice President Yemi Osinbajo said on his twitter handle that the Federal Executive Council (FEC) has approved the concession of Lagos and Abuja Airports. But, my VP can’t address us on twitter because it is not a base to address Nigerians or govern the country. It is not even part of the policies of the government. This concession exercise is a fraud. If you want to sell Lagos and Abuja Airports, all you need to do is to put it on the internet and interested investors will make enquiries and not by earmarking N659 million for the exercise. China is already requesting for its part of the $500 million for the construction of some airports in the country and the project is still ongoing. Who will bear the brunt? It is the same FAAN,” Abioye said.

Be the first to comment on "Concession: Mild Drama As Unions Quarrel At Protesting Ground"