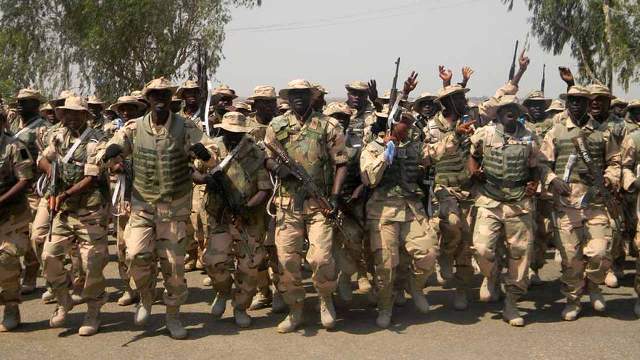 The 82 Division of the Nigerian Army is currently on a Field Training Exercise Code-named Exercise EGWU EKE (Python Dance ) II. The Exercise started on 15th September and will last till 14th October 2017 is meant to sharpen the skills the troops in the conduct of Internal Security Operations.

The exercise is also aimed to combating the security challenges in the South East and is well equipped to deal with the rising cases of insecurity such as kidnappings, farmers-herdsmen clashes, cultism, armed robbery, communal crisis, violent secessionist agitations, insurgency among others.

For emphasis, it is necessary to restate that the exercise and similar ones with different coded names in some parts of the country were deliberately initiated and conducted with an overarching aim of checkmating identified security challenges prevalent in the regions where they were carried out.

Some of the successful military exercises include: Operation Sharan Daji in tackling livestock rustling and armed banditry in the Northwest; Operation Awatse to tackle militants and oil installation vandals in South-West, especially in the creeks between Lagos and Ogun States; Operation Shirin Harbi in addressing restiveness in the North-East, especially Bauchi and Gombe States; Op Shirin Harbi in containing the rein of killers in Southern Kaduna; Op Harbin Kunama in resolving rustling and armed banditry in forest along Sokoto-Zamfara axis and Op Crocodile Smile, popular in the South-South to combat Criminal elements engaged in the the destruction of oil pipelines and installations.

The first PYTHON DANCE exercise was carried out in the South Eastern Region from 27 November – 27 December 2016. The peculiar security challenges in the region such as kidnapping, abduction, armed robbery, farmers – herdsmen clashes, communal crisis, traffic gridlock and violent secessionist agitation among others as the targets of this Exercise were successfully addressed.

The concept of the current Exercise, like the previous one is purely Command Post, Field Training and Real Time Exercise.

It is aimed to enhance troops’ agility and preparedness across spectrum of contemporary and emerging security challenges peculiar to South Eastern Region. The Exercise is three in one, in that – it was – deliberately designed as – a Command Post Exercise that transmuted into Field Training Exercise and where necessary dovetailed into real time mission or activities such as anti kidnapping drills, Patrols, Raids, Cordon and Search, Check Points, Road Blocks and Show of Force.

One interesting aspect of the Exercise is that it is multi agency in nature and execution. Relevant Para-Military organizations such as elements of the Nigerian Police Force, Nigerian Security and Civil Defence Corps, State Security Services and Federal Road Safety Commission synergized and collaborated to ensure successful execution and attainment of outlined objectives.

Also, the non-reliance on only Military Line of Operation to achieve the end states of the exercise was part of the texture of the strategy. For this reason, an elaborately generous Civil – Military Cooperation Line of Operation had been successfully planned and executed during this exercise. In this regard, some relevant Nigerian Army Corps and Services such as the Medical Corps and Engineers Corps carried out medical outreaches, roads and schools repairs across the South Eastern Region.

On the whole, the exercise has numerous objectives. Some of which are; to practice participating units on planning, preparation and conduct of Internal Security Operations, intensify training on Counter Terrorism and Internal Security Operations as well as to deter the activities of kidnappers, cultists, armed robbers and violent secessionist agitators. Others are – synergizing with relevant Para- Military services to address the identified threats and sharpening the skills of troops towards curtailing current and emerging security challenges peculiar to the South Eastern Region.

Please note, Exercise EGWU EKE II is not targeted at any individual or group, as law abiding citizens are advised to go about their normal businesses without fear.