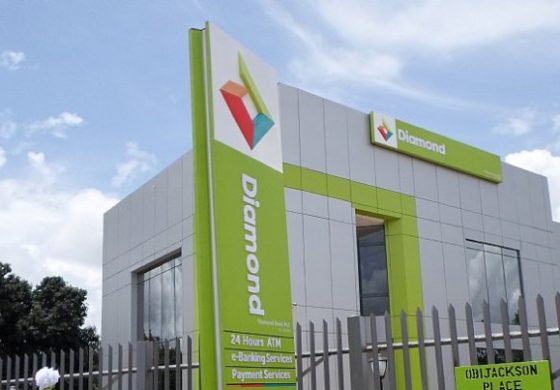 The aviation company in a suit filed at the Federal High Court, Lagos marked FHC/L/CS/1488/2017, is seeking an order of the court for special damages in the sum of $19, 250 million, against the bank being the revenue or income it lost from December 2014 to the date of filling the suit, caused by Diamond Bank’s unethical practices.

The aviation company  is also asking  the court for an order compelling Diamond Bank  to pay it the sum of $25 million and $875 000, as special and exemplary damages respectively, for several outrageous and reprehensible breach of its banker’s duties to it, and for loss of income which would have accrued to it from the commercial use of its aircraft.

Giving reasons for the current legal action, the aviation firm in an amended statement of claim filed before the court by its lawyer, Barrister Fidelis Albert, stated that it has a banker/customer relationship with Diamond Bank and that the relationship which still subsist, made it to open and maintain bank accounts with the bank in the course of banking business,.

The company said it maintains three dollars and two Naira denominated accounts with the bank.

The aviation company said that sometimes in 2010, it bided for and was awarded a multi-million dollar contract by Chevron Nigeria Limited (CNL), to provide aircraft charter and auxiliary aviation support services for Chevron, and that by the terms of the contract, it had the obligation to deploy two Bombardier Dash-8Q300 aircraft for the exclusive use and service of Chevron Nigeria Limited on an initial two-year charter.

It added that the purchase price for the aircraft was $9.5 million but that however, the cost of undertaking a comprehensive back-to-service maintenance on the aircraft before it could introduce the aircraft to its fleet for routine flights, was over $1 million and on account of prohibitive cost, it was constrained to approach Diamond Bank, as its banker’s, for a loan to finance the purchase, maintenance and importation of the aircraft.

The aviation firm stated further that in obtaining the credit facility, it entered into series of negotiations with Diamond Bank, and after its proposal including the risk, cash flow projections, income stream on existing contract, potential incomes and commercial viability has been fastidiously assessed by the bank and upon the conclusion of the negotiations, it was granted credit facility of $10.5 million.

The plaintiff also stated that by the term of the offer letter of the facility, it was required to make and indeed made, an equity contribution to the loan portfolio to the tune of 10 per cent of the value of the credit facility, which amounted to $1.050 million.

The plaintiff further stated that sometimes in  2010, it entered into an Aircraft Maintenance abd Service Provider Agreement (AMSP Agreement) with an aircraft maintenance facility in South Africa known as Execujet Maintenance (Pty) Limited.

Pursuant to the AMSP Agreement, it began servicing its aircraft fleets with Execujet. The first aircraft, similarly a Bombardier DHC-8-Q315 marked 5N-TBC and MSN 614, was delivered to Execujet for ‘C’ check sometimes in March 2013, for which Execujet completed the scheduled maintenance within a 10 -week period at a total cost of about $650, 000 million.

The plaintiff, averred further that quite unknown to it and while it was labouring to resolve payment issue with Execujet, Diamond Bank had sometimes in January 2015, surreptitiously circumvent it and commence clandestine discussion with the Execujet with a view to retaining the services of Execujet as its agent for sale of the aircraft. With this, the plaintiff said Diamond Bank and Execujet concluded an agreement dated May 14, 2015, the agreement it termed intended to overreach and extinguish its proprietary and ownership right of its aircraft.

The plaintiff alleged further that Diamond Bank interference with its contract with Execujet, through deceit, fraudulent misrepresentation and breaches of banker’s fiduciary duties to it, gave Execujet the impetus to boldly defraud it and foster the chains of fraud and breach of contract.

The company further alleged in its particulars of damage, that Diamond Bank breached its banker’s duties of confidentiality, care, good faith and honouring mandate to it, without cause, by divulging its credit standing and private financial information to Execujet in a false, misleading and inaccurate manner.

It also averred that  the bank maliciously misrepresenting its credit standing to Execujet without authority and also refused to honor its payment mandate to vendors in respect of the aircraft thereby injuring it’s credit and reputation.

The plaintiff averred that Execujet concluded maintenance of the aircraft on October 25, 2016, however following the action of Diamond bank, Execujet was in dilemma of who to hand over the aircraft to, in view of competing claims of the company and Diamond Bank, adding that with the steps taken by the Diamond Bank, consequently Execujet continues to unlawfully retain the possession of the Aircraft in South Africa at Diamond bank’s behest and pleasure, while the actions taken so far has  put Topbrass Aviation Company in a state of perpetual indebtedness to the bank.

Consequently,  Top brass Aviation Limited is urging the court to grant all the reliefs sought against Diamond Bank. The court has adjourned till next month for hearing when Diamond Bank must have filed its amendment statement of defence.

Be the first to comment on "Breach Of Contract: Topbrass Aviation Slams $45M Suit On Diamond Bank"