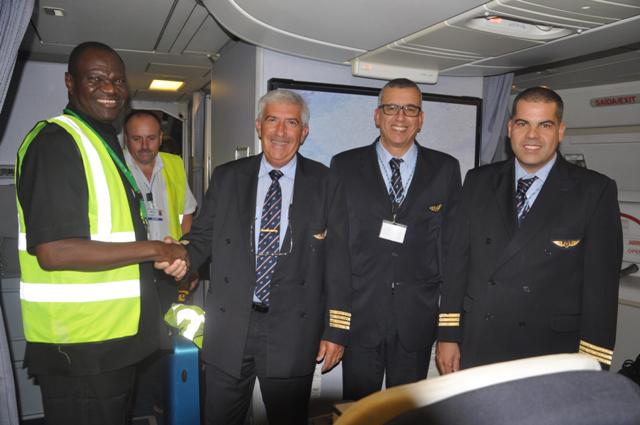 The aircraft with registration No.CS-TFM arrived the Murtala Muhammed International Airport(MMIA),Lagos at 11.48 pm to the jubilation of airline staff and airport workers.

The modern generation aircraft will be positioned on Sunday to service the Lagos-London route.

The aircraft is configured to sit a total of 326 passengers- 24 (flat bed seat) business class and 302 economy. * New aircraft of Med-View Airline Plc, B777-200 on arrival at the Murtala Mohammed International Airport, Ikeja, Lagos on Tuesday

The aircraft is also installed with IFE on individual seat of both classes of the cabin. Since its debut on the Lagos- London route, on November 20, 2015, the airline operated with B767 and later B747, which is now being replaced with B777 aircraft.

Speaking at a brief reception, Med-View Airline Chief Operating Officer/Accountable Manager, Engineer Lookman Animashaun, said the deployment of the B777 on London route is part of the airline  strategy to re-brand its international operations, especially the London route.

The COO disclosed that Dubai would be added to the airline route network in November.