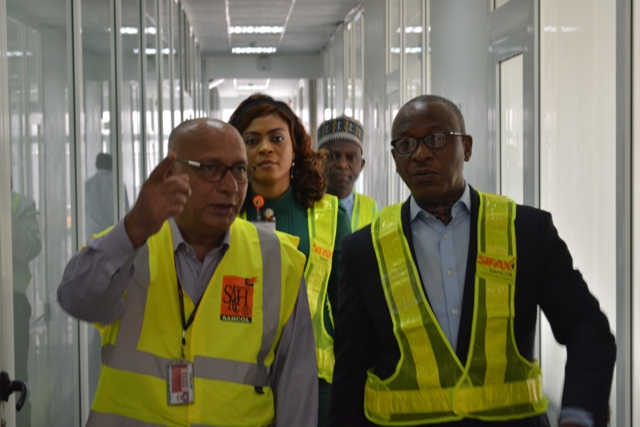 The Director General of the Bureau of Public Enterprises (BPE), Alex Okoh has paid a post –privatisation monitoring visit to the Skyway Aviation Handling Company Limited (SAHCOL) to ascertain the level of development that has taken place in the entity.

Speaking shortly after inspecting the facilities in the company, Okoh,who was accompanied on the visit by the BPE Director of Capital Market, Baba Mohammed, stated that the purpose of the visit was not only to applaud SAHCOL for a job well done but to also to see if it was ripe to give the ground handling company a clean bill of health, which would lead to the presentation of a discharge certificate to the company and be completely off the monitoring of BPE

The August visitors were received by the Managing Director of SAHCOL, Rizwan Kadri and the management staff at the company headquarters.

Okoh revealed that the initial briefing he had was that the SAHCOL facilities were ‘world class’ and that he was not expecting much as the term was usually used loosely, but  that what he saw after the inspection truly reflects the description of “world class”, adding that he was pleased with what he saw. SAHCOL, he said is one of BPE’s success story and that as a result the bureau would want to understand the dynamics behind the success and perhaps replicate it in BPE’s future privatisation and transactions.

“Essentially, we want you to know that we are quite pleased with the progress SAHCOL has made so far, which goes to justify the principles of privatization,” Okoh said.

Going down memory lane, the BPE boss made known the reason behind Federal Government privatisation exercise, stressing that the Federal Government, as part of efforts to put an end to the general notion that the government has no business in business, enacted a law in 1999, known as the Public Enterprise Act, to identify certain government enterprises that needed to be privatised and handed over to the private sector.

He stated that this was to ensure that the efficiency of the services rendered by these enterprises are improved upon and also to stop the bleeding in terms of the pressure that these enterprise that were not fully efficient were putting on the treasury of the federation. He stated that Nigeria Airways Limited (NAL) was one of the enterprises that was identified to be privatised, while others cuts across various sectors.

He added that incidentally, SAHCOL was one of the subsidiaries of Nigeria Airways that was slated for privatisation, adding that this was because of the realisation that ground handling as an aviation service will be best managed by private sector led initiative.

In addition, he said the transaction method observed and chosen for the privatisation of SAHCOL was full privatisation to heighten the level of services rendered considering the international benchmark.

He stated that in other enterprises that were sold, government had held some stake essentially to direct the strategic services that are provided to the public space. He reiterated that the essence of his visit to SAHCOL and what BPE tries to do, especially for the fully privatised company like SAHCOL “is to keep monitoring the performances of the level of services rendered, given the international best practices that have to be met, to ensure that they meet the critical objectives of privatisation in the first place.”

Okoh posited that SAHCOL is “a good story” as according to him all the privatised companies have not been successful “because in some of the fully privatised entity, what you find is that some of the services that they were supposed to render are not being rendered, essentially running fowl of the objectives of the whole exercise”, but that he was glad to say that bureau is impressed with what he has seen.

He commended SAHCOL for a job well done ,adding that BPE was also  looking at the possibility of the ground handling company listing some of its shares in the stock market in the future.

Recalled that SAHCOL was handed over to the Sifax Group in December 2009, after its successful privatisation by the Federal Government of Nigeria. Within this period, SAHCOL has invested in personnel development, purchase of modern equipment, infrastructural development and good customer services, which has helped reposition the company to meet the expectations and needs of its growing list of clientele.