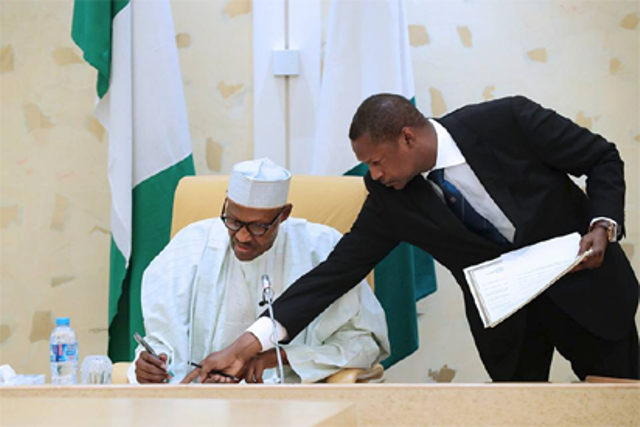 * President Muhammadu Buhari signing Instrument of Ratification for International Agreements between Nigeria and other Countries in State House,Abuja, yesterday.

The war against corruption was further boosted   yesterday when  the Federal Government, ratified nine international agreements between Nigeria and other entities to strengthen the fight in Nigeria and abroad.

President Buhari signed the agreements for the execution of the Instruments of Ratification at the Presidential Villa, Abuja, in the presence of the Ambassadors of Switzerland, Chad, Niger, European Union, United States of America and Britain, among others.

Speaking on the agreements,Buhari stated that  the ratification agreements would help to block illicit flow of funds out of Nigeria to other jurisdictions and improve Nigeria’s national and food security challenges, adding that it would add fillip to the country’s economic and tax regimes as well as the well being of the creative community.

Buhari directed agencies of government with roles to play under the respective treaties to ensure they carried out their anticipated tasks in an effective and responsible manner in order to ensure that Nigeria reaped the full benefits of the agreements.

The President, who described the agreement as a milestone, added that it was the government’s demonstration of sovereign capacity to fulfill its obligations and take important steps for the benefit of its economy, security and the anti-corruption war within and outside Nigeria.

Agreements on the World Intellectual Property Organisation Treaty on Audio-Visual Performances and the Marrakesh Treaty to facilitate access to published works for persons, who are blind, visually impaired or otherwise were also signed.

Be the first to comment on "Buhari Ratifies Extradition, Economic Treaties"