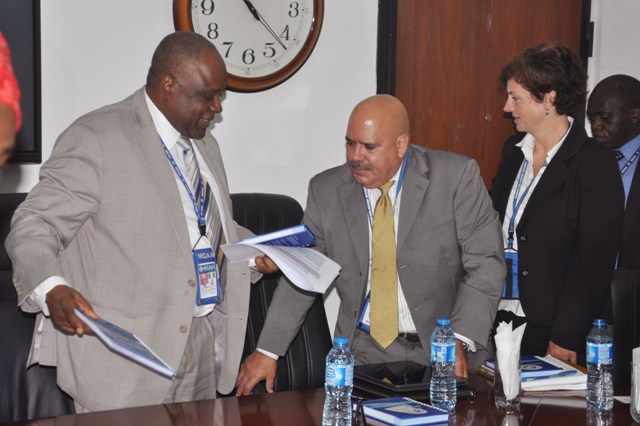 … Says Firstnation Has Converted From Scheduled To Chartered Operations

As the team from United States Federal Aviation Administration (FAA) begins  International Aviation Safety Assessment (IASA) of Nigeria’s aviation industry today, the Director General  of the Nigerian Civil Aviation Authority(NCAA), Capt. Usman Muhtar has stated that the agency was fully ready for the audit and retention of Category one status.

This is just as he said that Firstnation Airways ,one of the domestic airlines in the country  that was recently fined N33.5 million for violation of safety regulations has changed its Air worthiness from scheduled airline to non scheduled operator.

He stated this while briefing Aviation  Correspondents on the FAA audit  that starts today at the regulatory body’s headquarter, Aviation House,Murtala Muhammed Airport(MMA),Lagos.

The NCAA Director General said that NCAA was not only ready for the exercise but that it has done alot to ensure safety in the industry and that so much as been done in the areas of Personnel Licensing,international operations  and airworthiness.

The four team from FAA, he said would be in the country for five days, after which they would go back and makeits reports.

Going back memory lane, Muhtar said that Nigeria first achieved FAA Category one in 2010 and that the country retained the feat in 2014,adding that hopefully Nigeria would retain it again.

According to him, “We got FAA Category 1 in 2010,retained it in 2014.We hope that with the efforts we have put in ,we would be able to retain it this time around.” The NCAA boss added that during the audit , the FAA team will visit one of the airlines at the instance of audit team.

He posited that NCAA has done a lot to see that sanctions are enforced when there are breaches in line with the civil aviation regulations.

According to him,  “NCAA has done a lot in the areas that we are expected to cover and not only for this audit, in our statutory responsibilities; safety, aviation security and also regulations. We have the new civil aviation bill, which is on its way to the National Assembly. The bill is to enhance the current Act of 2006 and it’s supposed to be in line with the new annexes of the International Civil Aviation Organisation (ICAO) Convention. We also amended our regulation, which is 2015 Civil Aviation Regulation.”

He continued,”“In the area of enforcement and compliance, we have done a lot. We make sure that our regulations, which are mainly safety, are enforced. Our sanctions are not supposed to be punitive, but corrective. We have been sanctioning where we need to sanction in order to correct and instil safety in the system and even security. We thank God in the last two years we never had any major accident. There is zero tolerance in accident at NCAA.”

On the sanction imposed on Firstnation  Airways,, Muhtar said, “I will still reconfirm to you that whatever sanction we imposed on any operator it’s inline with civil regulation and it’s not punitive, but corrective.

First nation was sanctioned, they appaled, the appeal was upheld. So, we are atill working with them to pay the sanction. We don’t want to cripple any operations. If  It is safety related, we will not waste time, but the payment is being worked out now.”

It would be recalled that the NCAA had fined the airline and one of its pilots N32 million and N1.5 million respectively for violation of safety regulations in the industry in November 2016.

NCAA had accused the pilot of being in possession of an expired certificate, which it insisted violated safety rules.

The regulatory authority had also accused the pilot-in-command (PIC) of one of the two of the aircraft in the fleet of the company, an Airbus A319 aircraft, of flying without a current medical certificate, which is a serious offense in the global civil aviation industry.

Firstnation had filed an appeal following a letter of sanction written to the airline on January 23, 2017, which prompted the establishment of the appeal committee.

Be the first to comment on "Category One: NCAA Hopeful Of Retaining Feat–Muhtar"