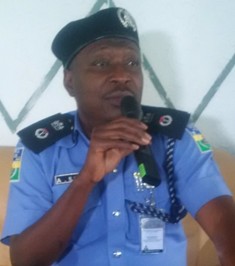 Ogun State Police Command has arrested a pastor and three other suspects in connection with the discovery suspected human parts buried inside a church in Ota.

Ogun State Commissioner of Police, Ahmed Iliyasu,while parading the cleric today in Ota,explained that the the founder of Cherubim and Seraphim Church, Itedo Isinmi Ayo Parish, Egan Road in Iyana-Iyesi area of Ota, prophet, Samuel Babatunde, 77-year-old  has been arrested.

The Police boss who conducted journalists round the Church premises stated that the discovery followed the arrest of a suspected serial kidnapper, Jeremiah Adeola on Saturday.

According to Iliyasu , Adeola, 32, specialised in kidnapping children and had already confessed that the prophet was the receiver of the abducted children.

The Police Commissioner further stated that a 43-year-old herbalist, Haruna Afolabi, was among the suspects, who allegedly buried the human parts at the entrance of the church.

According to him, “operatives attached to the police Area Command in Ota on Sunday received technical intelligence about Adeola and eventually apprehended him.”

He continued, “On the strength of the intelligence, detectives from Ota Area Command were detailed to effect the arrest of the suspect; and at about 10:20am of the date, their efforts paid off when the said Jeremiah Adeola was promptly arrested.

Be the first to comment on "Police Arrests Prophet, Three Others Over Human Parts Buried In Church"