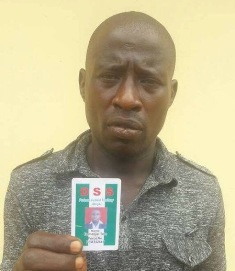 The Police in Enugu State has arrested a dismissed officer of the Department of State Service (DSS) and another for being in possession of 16 bags of cannabis sativa ( Indian hemp).

This was revealed by the  Command’s Police Public Relations Officer(PPRO), Mr Ebere Amaraizu,  in a statement issued in Enugu yesterday .

He disclosed that the suspects were arrested through intelligent information and a well coordinated operation.

The PPRO named the suspects as Emmanuel Ogbonna, who claimed to hail from Okpanam, Delta and Odo Chinedu of Aguabo from  Enugu State. He stated that at the time of their arrest, Ogbonna had with him, an identity card of the DSS with the name Emmanuel Tako and number FCA552447, adding that they were arrested when the operatives swooped on them at New Market axis of Enugu.

He posited that the bags of weeds were concealed in the booth of their Camry car with registration number LSR 769 DF.

The PPRO further stated that  the bags of weeds alongside the vehicle were recovered from them at the time of their arrest, stressing that further  investigation  revealed that Ogbonna was dismissed as a DSS personnel but was using the identity card to transport cannabis.