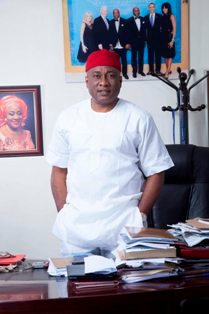 The Nigerian Institute of Management (Chartered) has endorsed the management style of Air Peace, affirming that the carrier’s Chairman/Chief Executive Officer, Mr. Allen Onyema has led the airline to make huge contributions to the development of Nigeria’s economy.

The institute which recognised Onyema as one of the recipients of the “Management Excellence” award of the 2017 Management Summit of the South South Zone held in Uyo, Akwa Ibom, said it was satisfied with the job creation and Corporate Social Responsibility(CSR) projects of the airline.

Justifying its decision to honour Onyema, the institute said it had “observed, with keen interest, your strict adherence to the application of best management practices in the running of Air Peace airline since its inception. In addition, we have noticed the immense contributions which Air Peace has made towards the physical and socio-economic development of states in the (South South) zone through the provision of employment and its palpable corporate social responsibility.”

Speaking at the Gala Night of the South South Zonal Management Summit, the Deputy President of NIM, Prof. Olukunle Iyanda and the Chairman, South South Zone of the institute, Sir Emmanuel Okafor praised the recipients of the awards for contributing to the socio-economic development of the nation through their different ventures.

They urged the recipients of the awards not to relent in deploying their management skills to transform the nation.

Be the first to comment on "NIM Rates Air Peace Mgt. High, As Onyema Wins Award"