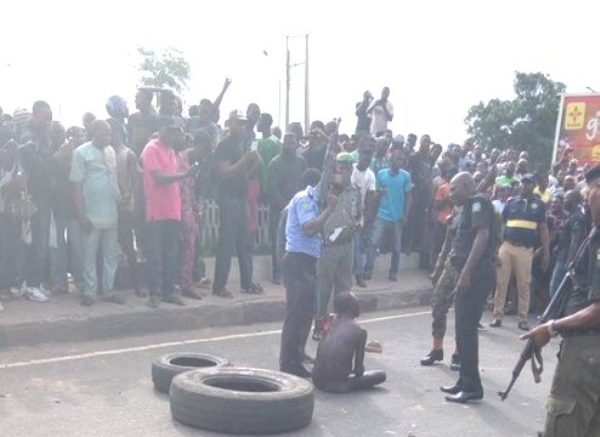 Another Kidnappers den has been discovered at Ile Zik along Lagos –Abeokuta Expressway in Lagos.

The discovery is coming two days after a sweeper in the employment of Lagos state drew the attention of Lagosians to a suspected kidnappers hideout  also in Lagos .

Abelnewsng.com learnt that out of anger , angry mob set the hideout on fire before  before the arrival of the Police.

According to one of the eye witnesses the hideout was a “cage” covered with clothes and used by a man suspected to be a “mad man.”

An eyewitness, who spoke on the issue  said,that they saw a man pretending to be a mad man  in the area and that he has been taken away by the police.

He said that items  such as ladies underwear, shoes, clothes,skirts and braziers were found at the scene.

He said that what surprised them was that they later discovered that the man was normal and not a mad man.

He stated that about four men including the man, who had been feigning madness were arrested by men of the Rapid Response Squad(RRS)

Those who are familiar with the area stated that the place had been a no go area for a very long time since the company that was there left .

According to the eye witness, “That place has always remain dark at night and people who know the place are usually not comfortable anytime they are passing there because it is too lonely.”

The Police Public Relations Officer(PPRO),Lagos State Command , Olarinde Famous-Cole, could not be reached to speak on the issue.

As the time Abelnewsng.com left the area at about 8.07pm  a large number of people were still there discussing the  issue in twos and threes while buses plying the road stop to know what was going on seeing the crowd.

Be the first to comment on "Again, Another Kidnappers Den Discovered At Ile Zik"