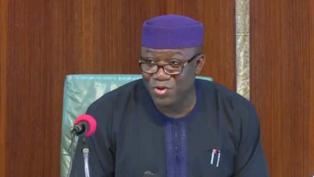 The Federal Government, through the Minister of  Mines, Steel and Development, Dr Kayode Fayemi has asked dredgers in Lagos to return to site and ignore the ultimatum issued by Lagos State Government .

The order became necessary following the ultimatum given to dredgers and other operators using the waterways.

Fayemi asked the duly licensed dredgers to disregard a recent ‘stop work’ order issued to them by Akinwunmi Ambode of Lagos.

A  statement signed by the Permanent Secretary of the Ministry, Mohammed Abass, stated that government establishment had already commenced the process of consultations with all relevant and affected arms and agencies of government.

“We are confident that an amicable resolution of this issue would be reached in no time, while also committing ourselves to the implementation of lawful court judgments,” the statement added.

The  Lagos State governor’s ultimatum followed a ruling of Court of Appeal,which the state claimed was In her favour.

The Mines, Steel and Development  Ministry said it was still studying the ruling of the appeal court, directing the dredgers “to continue about their lawful operations.”

“Particularly, we wish to frown at the way officials of the Lagos state government have gone about deliberately distorting the pronouncement of the appeal court in this matter. It is trite to state that by virtue of the constitution of the Federal Republic of Nigeria (1999 as amended), federal laws in respect of administration of mining activities and utility of inland waterways supersede those of states,” the statement  said.

The statement continued, “A cursory review of the ruling of the learned Justices of the Court of Appeal indicates a clear recognition of the powers and responsibilities of the various arms and organs of government with respect to administration of mining and inland waterways. We are therefore at a loss as to why officials of Lagos state government will willfully attempt to inverse the ruling of the court to suit their much anticipated outcome.The learned justices were clear about the extent and limitation of powers of the various arms of government.”