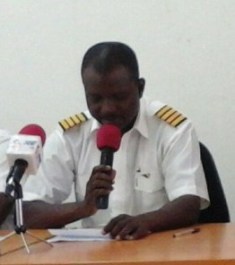 … NAAPE Kicks, As Airline Shops For Expatriates Instead

… Supports Airport  Concession  But Must Address Labor Issue,Follow Due Process

As the Federal Government through the Ministry for Interior  wages war against abuse of expatriate quota perpetrated by companies operating in the country, the National Association of Aircraft Pilots and Engineers(NAAPE) has disclosed that Bristow Helicopters , one of the airlines in the country  has refused to promote qualified and competent Nigerians into  vacant positions in the company.

The association stated that instead of using qualified Nigerians to fill the vacant positions in the entity,the rotary wing giant was busy shopping for expatriate to head these positions.

The National President of NAAPE, Engr. Abednego Galadima, made this known at the Murtala Muhammed Airport(MMA),Lagos while briefing aviation journalists at the weekend.

NAAPE , he said would no longer tolerate such practices and that it would  use every lawful means to ensure the company put a stop to it.

According to him, “We are aware for example that some airlines like Bristow Helicopter(sic) have refused to promote Nigerians into vacant positions despite the fact that Nigerians with requisite qualifications and experience abound in the company . At the same time the company is seeking expatriate quota to fill these vacant positions . NAAPE will no longer continue to tolerate this king of situation and will embark on lawful actions to force a remedy of such unwholesome practices in Bristow Helicopters.”

Galadima used the opportunity to  commend the Minister For Interior, Lt. General Abdulrahman Danbazau(rtd) for his efforts at working with the Nigerian Civil Aviation Authority(NCAA)to establish modalities for the implementation of the recommendations of the committee ,which has been submitted.

He urged the minister to fast track steps towards addressing this issue which will grant relief to pilots and engineers , who according to him have for long been rendered jobless by these acts of indiscretion on the side of many Nigerian airlines.

Recalled that the Ministry of Interior had set up a Committee on Expatriate Quota Abuse  to curtail the rampant cases of Expatriate quota abuses , a committee in which NAAPE served.

On the concession of  airports, Galadima stated  NAAPE fully  supports the concession of the four major airports: Lagos, Abuja, Port Harcourt and Kano ,adding that the association believes that the paucity of funds coupled with the numerous social demands would not allow the Federal Government to fund airport to the desired level of international competitiveness

He added that besides the paucity of funds, the issue of airport concession was a done deal by virtue of the agreements signed with China, which brought about China’s involvement  in the ongoing  building of  airport terminals .

He  stated that NAAPE’s support for concession of airports was predicated on the settlement of all labour issues  and in total compliance with the enabling laws guiding concession and privatisation in the country.

The NAAPE boss cautioned the Minister of State, Aviation, Senator Hadi Sirika  not to leave room for any perceived lack of due process to derail the good intention of the Federal Government.

On NCAA autonomy, the NAAPE President argued that only a  fully functional and independent NCAA can drive a truly revivalist agenda for the Nigerian aviation industry on a sustainable basis, adding that until this was  done, the present aviation development  would remain stunted.

NAAPE urged the Federal Government through the Minister of State as a matter of urgency commence the process of freeing NCAA from the apron string of the Ministry by constituting a governing board in accordance with the Act establishing it.

“NAAPE expects to see an NCAA that will not need to seek approval from the Ministry to recruit,remunerate, train,promote and generally manage its personnel. We wish to see an that does not need the approval  to implement its budget and carry out its regulatory functions without recourse to the Ministry . We wish to see NCAA whose principal functionaries stay at their duty posts rather than undertake endless journeys  to government functionaries  at the expense of the authority and its assignments,”NAAPE President said.

The President accused NCAA of not carrying out its regulatory functions on the ailing airlines;Arik and Aero, adding that what happened in Aero and Arik before the airlines were both taken over by Asset Management Corporation of Nigeria(AMCON)was simply lack of corporate governance.

“NAAPE is very unhappy with the state of lack of capacity by NCAA to effectively fullfil its mandate with respect to economic regulations. The ugly state of affairs that existed in Aero Contractors and Arik, which necessitated their takeover by AMCON were clear manifestation of ill corporate  governance .It does not require any special intelligence to know about the mal-administraion and financial irregularities that characterised those entities . That the promoters  of Arik and Aero were never questioned nor called to order by NCAA is a clear sign of failure of economic regulation on the part of the authority,” NAAPE declared.