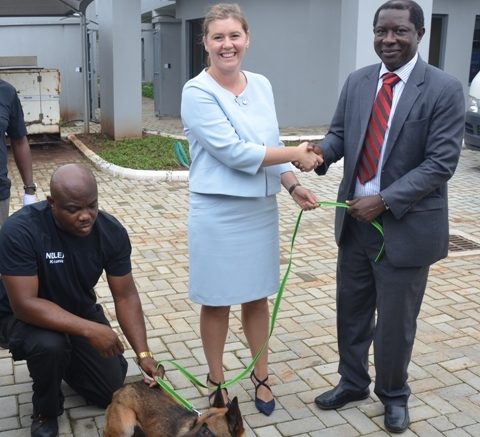 The German Government has donated six trained sniffer dogs and a Mercedes bus to the National Drug Law Enforcement Agency (NDLEA) to boost the country’s capacity to detect concealed drugs.

German Deputy Consul General, Alexandra Herr made the presentation in Lagos to the director of Operations and General Investigation of the Agency Mr Olugbenga Mabo.

Herr in her remarks said that Germany is making the presentation because it is important to have the right tools to work.

In her words, “It is important to have the right tools to work and I commend the cooperation between Germany and Nigeria in combating drug trafficking through the aid of sniffer dogs. I am eager to see positive results in the canine operations of the Agency”. In his response,Mabo thanked the German Government for the support and assured that the investment will soon lead to the dismantling of more drug trafficking syndicates in the country.

“Twenty major arrests and seizures of narcotic drugs comprising cocaine, heroin, methamphetamine, ephedrine, and cannabis with a combined weight of 17,432kg were made with the assistance of the sniffer dogs since 2009. The contribution of Germany government has made a tremendous impact on the operations of the Agency at the airport, seaport and land borders. This additional support will ensure that more drug trafficking syndicates are dislodged,” Mabo stated. This current batch brings the total number of donated dogs since 2009 to fourteen and trained officers in dog handling proficiency to nine.

Two Toyota Hiace buses currently being used to convey the dogs to operations areas as well as training materials were also donated by the German Government.

Be the first to comment on "Germany Donates 6 Sniffer Dogs,Bus To NDLEA"