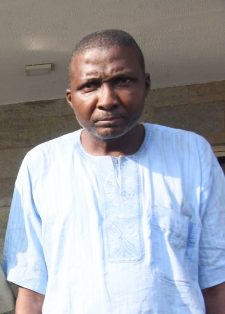 The latest development is coming barely 11 days after the Baale purportedly faked his  kidnap  that occurred  on July 5 along Centre for Management Development (CMD) Road in Ikosi-Isheri Local Council Development Area (LCDA) of the state.

The governor made this known in a statement iissued and  signed by the State’s Commissioner for Local Government and Chieftaincy Affairs, Hon Muslim Folami.

The  Governor in the statement ordered Ogundare to henceforth desist from parading himself as the Baale of Shangisha or discharge any duties attached to chieftaincy matters in the State.

Recalled that Ambode had on FrIday July 14,2017 suspended the  Baale few hours after he  and his brother Mohammed Adams  were  paraded by the Lagos State Police Command for conniving to fake the alleged kidnap.

According to the statement,  “This is to inform the general public that His Excellency, Governor Akinwunmi Ambode has authorised the deposition and persecution  by police of Chief Yusuf Mutiu Ogundare, Baale of Shangisha with immediate effect.This is in accordance with Section 38, subsection 1 of the Obas and Chiefs Laws of Lagos State inter-alia “The Governor may suspend or depose any Oba or Chief whether appointed before or after commencement of this law, if he is satisfied that such suspension or deposition is required according to customary law or is necessary in the interest of peace or good government.”

“Furthermore, he (Ogundare) is to stop parading himself, purports to exercise or discharge any of the duties attached to Chieftaincy Matters with immediate effect,” the statement added .

The statement added that the deposition follows the formal confession of the Baale to security services that he staged his own kidnap to blackmail the State Government.

Be the first to comment on "Ambode Deposes Shangisha Baale For Faking Kidnap, Orders His Prosecution"