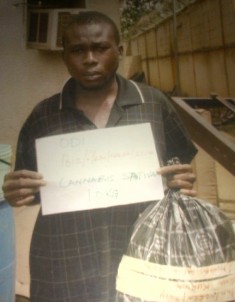 Justice Rilwan Aikawa of the Federal High Court Ikoyi at the weekend sentenced a deaf and dumb and a security guard to five years imprisonment each for dealing in cannabis and cocaine.

The deaf and dumb, Abbas Ahmed 23 years old was arrested by police officers on February 5, 2014 along Agege Motor Road, Agege Lagos arrested while dealing in a kilogramme of cannabis, a narcotic drug similar to cocaine contrary to and punishable under Section 11 (c) of the National Drug Law Enforcement Agency (NDLEA) Act Cap N30 Laws of the Federation of Nigeria 2001.

Adebowale Michael, 22 years old security guard was arrested with four pinches of cocaine weighing 0.7 grammes at Oniru Estate, Lekki Ajah Lagos by patriotic youths in February 2017 who handed him over to the police.

He was later transferred to the NDLEA, where he was charged for unlawful dealing in cocaine contrary to and punishable under the NDLEA Act. After a protracted trial of Abbas in which the court engaged the services of an interpreter to communicate with him, he recently pleaded guilty as charged.

The prosecuting counsel, barrister Jeremiah Aernan asked the  court to apply the punishment prescribed by the law strictly so as to deter others from getting involved in drug trafficking.

The convicts also pleaded for mercy urging the court to consider their young age and the fact that they are first offenders.

Justice Aikawa in his ruling noted that drug trafficking particularly cocaine trafficking is an international crime that has smeared the reputation of the country and must be seriously dealt with.

He therefore sentenced both convicts to five years imprisonment each.

NDLEA Chief Executive, Col. Muhammad Mustapha Abdallah (rtd.) commended the youths that arrested Adebowale, saying that “we must not sit and fold our hands while drug traffickers are making our society unsafe and insecure.”

Abdallah called on members of the public to report suspected drug cases to law enforcement agents for prompt action.

Be the first to comment on "Cocaine/Cannabis: Court Sentences Deaf And Dumb, Guard To 5 Years Each"