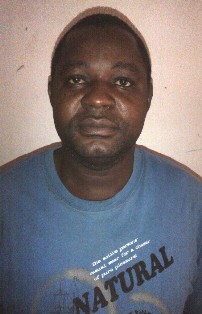 An ex-Customs official, Ngwoke Emmanuel has told National Drug Law Enforcement Agency (NDLEA) investigators that he collected N500,000 to smuggle contraband; used clothing from Seme to Lagos Island but during search it was discovered to be cannabis.

The suspect, who is being interrogated for his alleged role in trafficking 394kg  of dried weeds that tested positive for cannabis was arrested by customs officers at Gbaji checking point along Lagos Badagry express road.

He was immediately transferred to the NDLEA for investigation and the  estimated value of the drug is N4 million.

NDLEA Commander at Seme Border, Udotung Essien said that the suspect was transferred with 394kg of cannabis and the case is under investigation. * Emmanuel with the cannabis

In his words, “officials of the Nigeria Customs Service arrested and transferred one Ngwoke Emmanuel found in possession of cannabis weighing 394kg to the agency for further action. Investigation is ongoing and the suspect will soon be charged to court”.

The 39 year old suspect in his statement said that he was told by his accomplices that the content of the consignment was used clothing.

“I was paid the sum of five hundred thousand naira to smuggle contraband from the border to Lagos Island but when the consignment was searched by customs officers at Gbaji checking point, it turned out to be cannabis. That was how they arrested, dismissed and transferred me to NDLEA. I am completely obsessed with the thoughts of taking care of my wife and child. I do not know what next to do.”

NDLEA Chief Executive Col. Muhammad Mustapha Abdallah (rtd.) while commending the Nigeria Customs Service(NCS) for acting courageously and professionally assured members of the public of diligent prosecution of the suspect.

Be the first to comment on "Ex-Custom Official: I Collected N.5million To Smuggle Drugs Across Border"