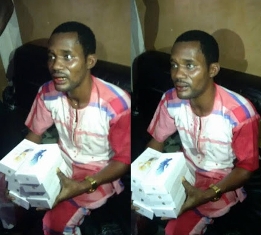 The scheduled trial of Nigerian film maker, Olajide Kazeem, popularly called Seun Egbegbe and other accused persons arraigned over alleged multi-million dollars fraud before a Federal High Court, Lagos was stalled due to the absence of the prosecuting Police Officer.

Other accused persons charged before the court by the Men of State Criminal Investigation and Intelligence Department (SCIID) Panti-Yaba, Lagos, are: Oyekan Ayomide, Lawal Kareem, Olalekan Yusuf and Muyideen Shoyombo.

Consequently, Justice Oguntoyinbo adjourned the trial of Egbegbe and other accused persons was adjourned till October 3 and ordered them to be returned to Prison’s custody as they are yet to meet the bail conditions granted them by the court.

Recalled that the Nigerian film Maker, Egbegbe and his co-accused were re-arraigned by the police in a third amended charge marked FHC/L/40c/2017, on charges bordering on conspiracy, stealing, and fraud in the sum of N39, 098,100, $90,000 and £12,550, belonging to over 30 Bureau De Change Operators.

The police alleged, for instance, that on February 2, 2017, Egbegbe and his co-defendants fraudulently obtained the sums of N2.45m and £,3,000 from one Alhaji Isa Adamu in Lagos under the guise that they wanted to see the naira and buy the pounds.

The police prosecutor, Mr. Innocent Anyigor, told the court that Egbegbe and the others acted contrary to Section 8 of the Advance Fee Fraud and Other Related Offences Act 2006 and were liable to be punished under Section 1(3) of the same.