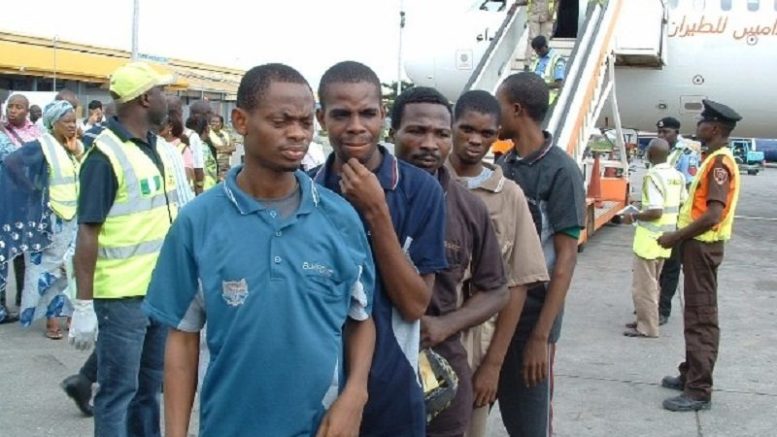 European countries today deported 34 Nigerians for allegedly committing immigration-related offences.
Abelnewsng.com learnt that the 34 deportees were deported from Switzerland, Germany, Iceland, Austria, Belgium and Hungary.
They arrived at the international wing of the Murtala Muhammed Airport (MMA) Lagos at about 6.30am in a chartered Airblue Panorama aircraft.
The deportees includes 32 males and two females.
Lagos Airport Police Command Public Relations Officer,Deputy Superintendent of Police(DSP) Joseph Alabi, confirmed the development.
“This morning, we received 34 Nigerians who were brought back from Europe. They were made up of 32 males and two females. ”
He stated that all the deportees were alleged to have committed immigration-related offences in their host countries.
On arrival at Lagos Airport the deportees were received by officials of the Nigerian Immigration Service (NIS) , the National Agency for the Prohibition of Trafficking in Persons (NAPTIP) and the Police.
Other agencies who also at the airport to receive them were officials the Federal Airports Authority of Nigeria (FAAN) and the National Drug Law Enforcement Agency (NDLEA).
As it is usual , the deportees were profiled by officials of immigration and after which were allowed to depart to their various destinations.

Be the first to comment on "EU Deports 34 Nigerians"