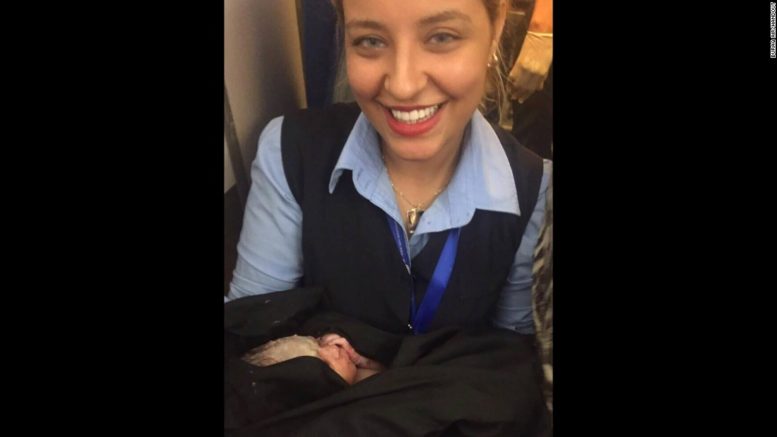 * The new born baby boy is pictured in the arms of one of the cabin crew.

They say walk before you can run, but chances are, this kid will probably just fly.
A new-born baby has been awarded a lifetime of free flights on Buraq Air after his mother gave birth while aboard the airline.
The airline announced the gift on its Facebook page in celebration of the inflight birth.
The boy’s mother was flying from Tripoli in Libya to Niamey, the capital of Niger, when she went into labour, Buraq Air employee Amir Abu Sin told CNN.
Buraq Air, based in Tripoli, offers flights within Libya and to destinations in Europe, North Africa and the Middle East.
The bouncing baby boy happily, but rather surprisingly, arrived in the world with the help of the flight’s cabin crew. In recognition of their efforts, the mother named him Abdul Baset, after the plane’s captain.
Most airlines don’t keep records of births so statistics are hard to come by. But it seems there may be something in the air — as this isn’t the first baby born on a plane in the last month.
A baby girl, Haven, came bouncing into the world while her mom was on a flight from Dubai to Manila on August 14. Haven was gifted 1 million air miles from Philippines flight operator, Cebu Pacific.
Source : CNN