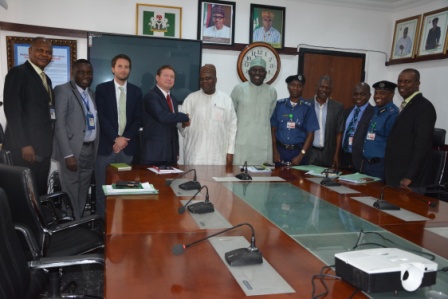 The Director General Of the Nigerian Civil Aviation Authority (NCAA) Capt. Muhtar Usman, on Monday met with the American Transportation Security Administration (TSA) over the implementation of Federal Government Executive Order as it affects Delta Airlines operations at Murtala Muhammed International Airport (MMIA),Lagos.
The TSA Attache- West African Region, Mr Gary Pleus was in the company of Mr James Plasman, Economic officer of the United States Consulate General and Group Capt. USA Sadiq, Director Security Services, Federal Airports Authority of Nigeria (FAAN).
Recalled that Delta Air Line had insisted of physically screening passengers and their luggage , a situation that contradicts the directive of the Federal Government on the implementation of Executive Order
The Federal Government as part of the implementation of Executive Order had directed all airlines to remove screening counters at the airport for the profiling and screening of passengers.
The Federal Airports Authority of Nigeria (FAAN) Aviation Security(AVSEC) personnel had confronted officials of Delta Air Lines on the need to comply with government directive but that the airline insisted that it would carry out physical screening of passengers and their luggage.
The airline it was also learnt had stated that it would not board passengers if it was not allowed to physically screen passengers, addig that it was obeying directives from its home office in Atlanta, USA.
However, a statement by the airline made available to journalists said, “Delta Air Lines works closely with aviation authorities around the globe. Delta is actively working with both the authorities in Nigeria and the United States to understand the new Presidential directive and ensure we remain compliant with the respective authorities. Delta is subject to U.S. Government and Nigerian Government security regulations. The safety and security of Delta’s customers and crew is the airline’s number one priority.”

Be the first to comment on "Delta Air Line: DG NCAA Meets TSA Over Implementation Of Executive Order"