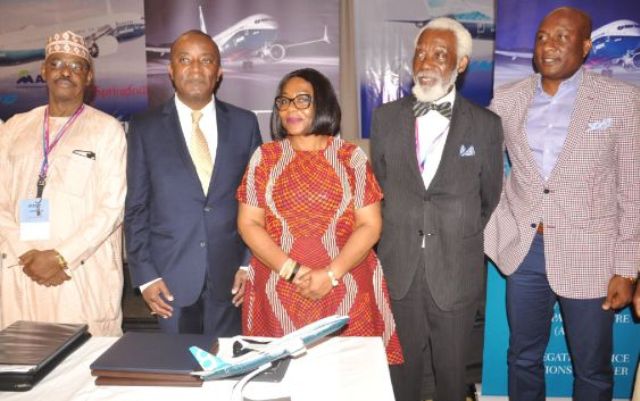 Springfountain Infrastructure Limited, a Nigerian company has stated that its proposed investment of over $20 billion in aircraft leasing, Maintenance Overhaul and Repair (MRO) Spares Logistics and Supply and Aggregated Services Solution will require the local skills in diverse fields ranging from piloting, aviation engineering, aviation economics, and aviation law among others.

At the signing ceremony, the Sales Director, Boeing West and Central Africa, Mr Larry Tolliver, signed for Boeing while the Mrs Tokunboh Fagbemi signed for Springfountain.

With this development, Springfountain In become the first Africa Aircraft Leasing Company (AALC) and provide other services to airline operators in the country.

Speaking for Springfoundation, shortly after the signing ceremony, Fagbemi, “I cannot agree more with him especially today after signing this historic and iconic “working together agreement” with the world’s largest airframe manufacturer, The Boeing Company USA. This is a major step in moving forward in “the sands of time” to play our role in repositioning Aviation in Africa through our African Aircraft Leasing Project. This is the culmination of over 25 years journey in aviation and two years plus discussions with Boeing. It also marks the beginning of implementation of innovative, customised solutions and Technology which will reposition Nigerian and indeed Africa’s Aviation industry.”

She stated that aviation in Africa in particular, Nigeria has had a rocky history but has a promising future, adding that it is time to move and not procrastinate.

Fagbemi posited that there is a clear need to increase air fleet capacity especially with new single aisle aircraft, adding that Springfountain intend to acquire and lease at least 200 new aircraft within the next 20 years.

She added that this may look impossible to some at this time given past realities but that Springfountain believe it is achievable with the right strategies, culture, attitudes and support.

According to her, “Our key driver is to provide platforms and systems that will reduce the Cost per Air-Seat Kilometre (CASK) of our clients. In line with our strategic motive of providing platforms and systems to drive CASK down for our clients we are in full support and part of the initiative of AADF, Boeing, and Springfountain. We are delighted to be part of this large family of diverse aviation professionals dimensioning how best to make these dreams and plans a reality goal by looking at Aviation Education and Aviation Education Infrastructure. This will also go a long way in establishing Nigeria’s leadership in African and global aviation and making Africa great in global aviation.”

Speaking earlier the  Boeing Company Head of Sales hinted said that Being before now was doing the research to manufacture aircraft without the input of the customers , adding that after the manufacturing B777, the aircraft manufacturing giant took a decision that it would always involve its customers

He disclosed that Boeing has been working with Springfountain in the past two years, adding the partnership with a Nigerian entity is a demonstration that Boeing is ready to involve customers in the manufacturing of aircraft that would give them satisfaction.

He added that Boeing has been working with airlines such as United Airlines, British Airways and GCAS, an aircraft leasing company.

1 Comment on "Nigeria Coy To Invest $20B On Aircraft Leasing, MRO, Others"