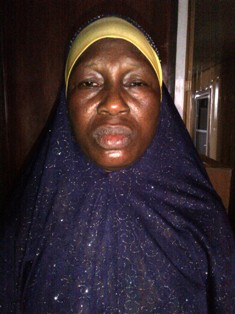 The National Drug Law Enforcement Agency (NDLEA) at the international wing of the Murtala Muhammed Airport (MMA), Lagos, has arrested Owolabi Oluwayemisi Modinat, a 54 year old single mother of four children on pilgrimage to Saudi Arabia with substances that tested positive for cocaine.

The arrest is coming barely four months after Odeyemi Omolara Morayo a.k.a. Ariyo Monsurat Olabisi was nabbed with 1.595kilogramme of cocaine on her way to Saudi Arabia in February.

The suspect who hails from Kwara State was apprehended during the outward screening of passengers on a Qatar airline flight to Saudi Arabia after testing positive to drug ingestion.

According to the anti narcotic agency preliminary investigation revealed that she ingested 32 wraps of substances that tested positive for cocaine weighing 330 grammes.

The suspect, who hawks tea and bread to earn a living in Lagos was found to have collected N300, 000 to smuggle drugs to Saudi Arabia under the pretext of going for pilgrimage, adding that she was also going to Saudi Arabia as a private pilgrim and not as a group.

NDLEA Commander at the Lagos Airport, Ahmadu Garba, said that this was the second arrest of a pilgrim at the airport.

He recalled that one Odeyemi Omolara Morayo a.k.a. Ariyo Monsurat Olabisi was caught with 1.595kg of cocaine on her way to Saudi Arabia in February.

He also added that the suspect, Owolabi Oluwayemisi Modinat was cooperating with investigating officers and that she will be arraigned as soon as investigation was concluded.

The suspect in her statement explained that poverty led her into drug trafficking.

In her words, “I have never travelled outside the country before now. I am a single mother of four children. I sell tea and bread to earn a living. At present, I have no money to continue with my tea business due to family problems. A man met me and promised to help me by sponsoring my trip to Saudi Arabia. As a Muslim, I was happy but he later asked me to swallow the drugs. I agreed because he promised to pay me N300, 000. I have too many problems and nobody to help me”.

The NDLEA Chief Executive Officer, Col. Muhammad Mustapha Abdallah (rtd.) while commenting on the arrest of Oluwayemisi Modinat ,said that the agency is working to prevent those hiding under the cover of pilgrimage in trafficking narcotics.

“There is no hiding place for drug traffickers. We are prepared to stop their ignoble acts and prosecute them to serve as deterrent to others. It is even more disturbing that despite the death penalty for drugs in Saudi Arabia, these criminal elements still recruit mules on a suicide mission”.

The NDLEA boss called on members of the public to be vigilant and avoid falling prey to drug barons.

The NDLEA boss stated that the suspect would soon be charged to court.