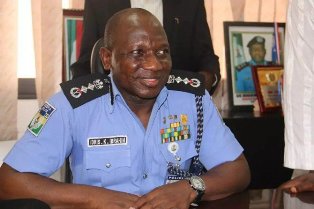 This is the year 2017. And this is not a military regime in Nigeria. However the entire indigenes of Idumuje Ugboko in Delta state are facing the deepest betrayal by any police department to be ever recorded in Nigeria.

Idumuje Ugboko historically is known to be a very peaceful town with generally very passive indigenes. It is a town of relatively poor citizenry most of whom survive through small scale individual farming. The town has no notable flowing rivers and as such does not have an aquatic means of survival for its indigenes. As such their land is their all in all.

In the preceding week of this month of May 2017, the Delta State police commissioner and his deputy spent practically an entire night in the house a politician, who has gone on a devious campaign to bring the town to its knees. As the police commissioner and his deputy were in Idumuje Ugboko dinning and whining with this politician, celebrations were going on by his political thugs, who earlier that day received police protection while they scuttled a very important town meeting. A gang like application of fierce assaults in which the police refused to make any arrests.

The problem with this meeting was simply that the town had come to a point in which a consensus had been reached to ex-communicate this “acidic soul” from amongst them. And this meeting was the final step in the traditional process.

After this meeting was scuttled in the presence of the police, the force then demanded that Idumuje Ugboko formally notify them with no less than 24 hours prior to holding an Izuani meeting. The town complied with this in the hope that they would receive protection from the thugs of this cancer in their midst. The betrayal was consistent as the police arrived only to inform the town that the meeting must not discuss anything about their chosen political candidate. And as such the meeting must not hold at all.

As soon as this was achieved the police withdrew their forces and gave liberty to four bus loads of foreign thugs to invade the town. The youths of the town engaged in a defiant resistance while all police presence varnished from the town.

It is no secret that this man whom the town has rejected has allegedly spent so much money in gifts and generosity to members of the Delta State Police Force. This is understandable for a man who has substantial wealth that cannot be traced to anything productive.

He has no tax records that show he has ever made legitimate money not to talk of the kind of money that he spends. He owns no company that produces anything. He does not go to work in the morning nor does he come back from work on any evening. He just has money that can be used to annex the soul of the Delta State Police top staff into betraying an entire community.

Why does Idumuje Ugboko community (especially the Royal family and dynasty in the town) appear so hell bent on excluding the provider of such lavish traps that even the police top bras have fallen easy prey to. The story though long is really very simple and can be summarised as follows.

Chinaedu has now been confirmed to be naturally born into the Odai family of Ukunzu outside of a matrimonial relationship. As his then young mother needed protection from the estranged lover’s family, he was allowed to be raised as part of the larger Nwoko family. This resulted in him usurping the family name and secondary benefits that come with it.

Apparently stories by close relatives regret that this had not necessarily been clearly identified as a problem in his childhood days. His slippery and unethical behaviours while growing up were simply hoped to be nothing more than delinquent youthfulness and lack of biological paternal identifications.

The first real issue he had with the town occurred when he requested for 33 hectares of land to be used to develop an agro project for the sole purpose of employing the youths of the town. This was granted to him. In return he built his personal property on this piece of land to display his unexplainable wealth.

Within the last few years, he returned to request for another 93 hectares of land to use for a golf course which he intended to add to his current 33 hectares of land. Prior to this he had solicited support for his plans by way of gifts to poor rural elders. Unfortunately for him there were some people younger in age that had no business soliciting his improper gifts in exchange for support.

Prominent amongst these was the then heir apparent to the town Prince Nomso Nwoko. He spoke out against this request and opposed it in every meeting in which it could be treated.

This and nothing but this alone became his crime against the Delta State Police Command and Ned.

Prior to this he had no case (criminal or civil) with the police department of the state. Prior to this he had no case in court in delta state or outside of delta state. He is now the King on the throne in Idumuje Ugboko (pending the coronation ceremony) and the Delta State Police command through its criminal investigating unit is harassing him (and key Ned Nwoko land request objectors in the family) with the accusation that they murdered their 91 year old farther. A man who was sick for over a year before he finally passed away peacefully.

It is time that all citizens of Delta State refuse to be silent on this matter. People should not forget that it could be Idumuje Ugboko today but tomorrow it could other towns and communities.

Idumuje Ugboko has put up with Ned forcefully trying to change the old system of kingship to that has been existence for centuries to ensure the throne is subverted into the hands of someone, who will give him the land he is craving for.

Idumuje Ugboko has endured the attempt to depict their king as a mad man by publications sponsored by this fatherless adult in their midst.

Idumuje Ugboko people have endured criminal cases being lodged against their king by stooges of this untamed political sore thumb.

Idumuje Ugboko has endured thugs of this undesirable stranger coming into their sacred palace and attack octogenarians while performing their traditional duties.

Idumuje Ugboko has endured members of the Delta State Police Command looking for ways to arrest their king so that its political associate can intertwine them with more favours. The Police also attempted to arrest him at the palace. A trip in which they brought a journalist with them to record the attempted arrest.

Sad to say that the Police Commissioner initially denied knowledge of the attempted arrest. But everyone now knows better.

Idumuje Ugboko people have endured seeing political thugs of this persona non-grata of the town celebrate their assault on the palace together while drinking with the police, who were present during the assault.

Idumuje Ugboko people have endured the daily sight of 33 hectares of its fertile land being used to showcase one man’s ill-gotten riches. Lands that families inherited from their previous generations were  annexed for a town project that that was a hoax from the start.

Idumuje Ugboko has endured seeing a man whose father is not from Idumuje Ugboko fighting to control the destiny of a pre-defined order of throne ascension that the entire town holds sacred.

Idumuje Ugboko is now suffering absolute betrayal by the Delta State Police Command and government forces that are supposed to protect them. Totally selling them off in favour of one corrupt individual

Idumuje Ugboko is still struggling to endure a situation that calls for all in Delta state to rise against a politician backed by a police department that has a clandestine agenda against the community at large.

Idumuje Ugboko has decided to exclude Ned Nwoko from its midst. This can never be changed. Now all citizens of Delta State must rise up in clarity of voice and stop the present leadership of the Delta State Police Command in their corrupt alliance with Ned. An alliance that is designed to painfully erode any sense of freedom, pride and dignity for the people of Idumuje Ugboko.

As at the time of the writing of this article, Delta States Police teams combined with foreign thugs have blocked the only entrance to the town. Blockading and starving the indigenes off and denying them access to life outside of the village. They have done this exactly in front of the house of this politician to protect his premises.

Despite this they have allowed thugs from the same group to repeatedly go into the town to attack the palace and citizens. In the resulting clash in the last couple of days, one life has been lost. And the police are hell bent on continuing to cripple the town while this individual is further exalted over them.

The police ignored gun shots going off at the surroundings of the palace. Worse still, whenever these thugs were resisted, they simply retreat under police cover to Ned’s house for further police protection.

The Delta State Police Command has a lot of questions to answer on this matter and in due season they must be made to answer for their crime if we all stand up for what is right in Idumuje Ugboko.

If the Governor of Delta State is not informed about this matter, we would have done the entire Delta State great injustice.

The people of Idumuje Ugboko must be allowed to carry out their traditional rites to exclude Ned from their midst in the best interest of the town. If this is too painful for the Police Commissioner and his associates, if this does not augur well with their biases and prejudices against the Idumuje Ugboko people, if this puts them in an unfortunate and irreversible situation that demands that they unrepentantly labour to protect injustice,… we still must all ensure they are prevented from hipping the collateral burden of their shameful situation upon the people of Idumuje Ugboko!

The crimes of this individual against the people and the town leave no foundation upon which any future relationship with him can exist.

In seeking any mediation on this matter, it would amount to complicity to premeditated enslavement and betrayal if Idumuje Ugboko town and people are stopped from executing their traditional rights.

Dear Inspector General of Police Sir, please do find this community of small scale farmers and retired civil servants, to be worthy of a dignified place in this country, in this age, in 2017.

For their sakes and for the sake of their future generations, sanitise the top echelons of the Delta State Police Command and remove the hedge of “protection by corruption” through which Ned Nwoko has continued to express madness at no cost to him.

Ferdinand Osuofia (Esq) is a public affairs analyst Based in Agbor, Delta State.