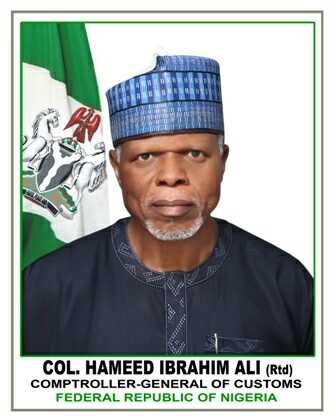 If we really want Nigeria to grow beyond our expectations, we need to start caring for ourselves and for each others’ livelihood.

There are so many areas we have long ignored, but I am certain it is not too late to set things in the right direction. Nigeria Customs Service (NCS) should be at the forefront of our nation’s revenue generation. It is to be pampered so we may get the best out of them.

But instead, we have ignored the organisation and its personnel, we have allowed the menace of corruption and negligence to eat deep into the system’s backbone, we have allowed the confidence of the agency’s officers to be swallowed by the tides of other agencies’ pride. This is not the way into the right direction.

The appointment of Col. Hameed Ali as the Customs Comptroller General came as a bit of relief because he promised them exactly what they all wanted; a better welfare. All officers and men know that with a good welfare, there is more to revenue generation, certainly their peanut salary cannot only feed them and their family. It also cannot take them from point A to point B in terms of posting.

Col. Hameed Ali(rtd) made an obvious assurance that no officer would be transferred from one state to the other without adequate allowance and a secured accommodation, but the promise was only one of the many.

He made a whole lot of promise but the only one he fulfilled was the disengagement from service of more than 300 officers and men, without the approval of the board.

These are people that are risking their lives day and night to protect our borders and to make sure our revenue increases. They are Nigerians not aliens, they are our sons and daughters, not foreigners and I think they deserve to be treated better.

Before the end of April, 2017, a general Movement Order (posting) came out and people were posted from one state to the other. They know it is their duty to be posted as at when due but it is also their right to have a proper accommodation wherever they are posted to and to be taken care of. The management did not bother about accommodation or even how they are going to survive in places that most of them have never even been to.

For example, a particular Customs officer (name withheld) was transferred from Osun State to Maiduguri, she managed to borrow money to report as soon as possible so that she would not be penalised for reporting late. She had to stay in a hotel; hotel Customs did not provide or pay for and no one asked about her welfare. This is just one person’s nightmare out of thousands. I reliably gathered that some of the officers posted out either sleep in mosques or offices because there was no provision for their accommodation. This is not only unfair but also barbaric, to risk the lives of our able youths and allow their hopes to be eaten by the greed of their leaders. I am certain the case is not like this in Central Bank of Nigeria (CBN), Federal Inland Revenue Service (FIRS), Petroleum Trust Development Fund (PTDF) and even the Nigeria Port Authority (NPA). And these agencies are not performing functions that are more important than what Nigeria Customs Service (NCS) is performing. NNPC for example even provide meal allowance.

How can a “One Star” Customs officer on Level 8 be on a salary of N84, 000 without any other allowances? Is it from this peanut we expect them to pay for their accommodation wherever they are posted to and to cater for themselves?

The workforce of Customs nationwide is not even up to the number of Police in Lagos state and they are still finding it so hard to take care of their own officers and men.

I am using this medium to plead with the President, the Vice President, Senate President, Minister of Finance and also Col. Hameed Ali to look into the plight of Customs officers; their suffering is just too much and if we allow the sins of a few corrupt heads amongst them to spread to the innocent ones, we are only creating a dying society.

If they are generating more than a trillion naira yearly, protect our borders from illegal importation, they deserve to be treated like kings and queens not slaves. Enough of all the maltreatments and dream – killer policies meted out to the officers and men of Nigeria Customs Service.

They face a lot of problems, but as it is today welfare is their number one problem and if this challenge is taken care of, it would not only boost their morale but also increase the level of our revenue generation.