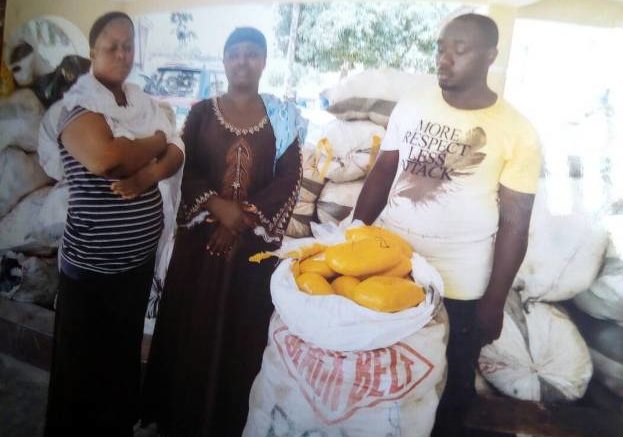 The illicit drug consignments originating from Ghana through the water ways were seized in two separate operations at Badagry, Lagos State.

According to NDLEA, four suspected drug traffickers including a Ghanaian were also apprehended in connection with the seized drugs while two vehicles used in conveying the drug have been impounded by the agency.

The anti drug agency put the estimated value of the drugs at N60 million.

NDLEA Commander at Seme Border, Mr Udotong Essien said that the twin shipments of cannabis were made within 48 hours.

He stated that the first consignment of cannabis weighing 3,525kg was discovered in a clandestine warehouse where a Ghanaian and two female Nigerians were apprehended.

He gave the name of the suspects as 38-year-old Ghanaian, Adoboe Nana Shelter as well as two female Nigerians Falilat Sadiq and Mary Ige Joseph both 39 years old. * Bola Adigun with the seized cannabis

He added that the following day, the command made a similar seizure of cannabis weighing 2,338kg being smuggled in a Bus meant for distribution in Lagos, adding that a male suspect, Bola Adigun was equally arrested in respect of the second seizure.

According to the agency, the criminal group specialises in smuggling compressed cannabis through the water ways into the country and use yellow commercial bus in inter supply to dealers within Lagos.

The agency said that they also use ladies who pretend to be legitimate traders conveying their wares to preferred destinations.

The Ghanaian, who claimed to be a fisherman, said in his statement that he illegally imported cannabis into the country because of the anticipated financial gain involved. According to Adoboe, “I am a fisherman from Volta region in Ghana. A friend introduced me into hemp business because of the profit. The two women work with me in distributing the drug in Lagos. This is my first arrest and I promise to quit drug trafficking if released.”

The Chief Executive Officer, NDLEA, Col. Muhammad Mustapha Abdallah (rtd.) in his reaction described the seizures as a sweet victory against the activities of drug trafficking syndicates working at Seme border.

According to Abdallah, “I am very pleased with the latest seizure by Seme border command. The illicit activities of the criminal group have been closely monitored by undercover officers until it was expedient to intercept the drugs. This is a sweet victory for the Agency and a demonstration of our capacity to dislodge drug trafficking groups in the country”.

He continued, “We are taking legal steps to sanction those arrested for smuggling the drugs and also forfeit both the warehouse and vehicles used in conveying the drugs. These are essential elements in ensuring absolute dismantling of drug trafficking cartels. Let me warn that the entire border and water ways are under our watch to uncover drug smuggling and prosecute offenders in accordance with the NDLEA Act.”

The NDLEA boss urged security agencies to collaborate towards a common goal of enhancing national security.

He also called on members of the public to report suspected drug activities in their neighbourhood to the agency for prompt action, adding that the suspects will soon be charged to court.

Be the first to comment on "NDLEA Intercepts 5,863KG Of Cannabis From Ghana At Seme Border"