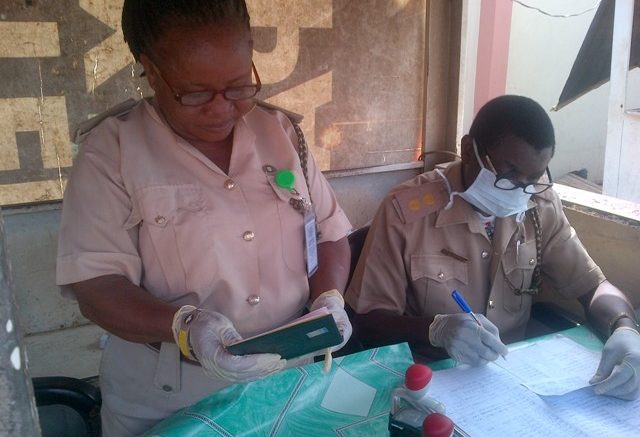 The Comptroller Of Immigration ,Seme Border Command, Mr Ibrahim Liman has stated that officers of the Nigerian Immigration Service(NIS) and other security agencies at the border are fully ready to help in ensuring that the dreaded Ebola disease do not spread to Nigeria .

This is just as he told Abelnewsng.com in an interview that the command has sensitised its officers on Ebola and the need to be very conscious in view of the fact that NIS officers are the first persons, who come in contact with people coming into the country on arrival at the borders.

He also disclosed that already officials of Port Health from the Federal Ministry of Health were on ground wearing medical hand gloves in their hands and using infrared equipment to take the temperature of those coming in through the Seme Border.

The Comptroller pointed out that the true position of things is that those coming into the country are being screened before they are allowed into the country, adding that all the agencies are carrying out their constitutional responsibilities at the border.

Liman stated that he had sensitised NIS officers at Seme border on the need to be extra careful as they check people coming into the country using the Seme Border with the outbreak of Ebola in Congo.

The Comptroller stated that NIS at the Seme Border was collaborating with Port Health, and other security agencies to ensure that nobody comes into the country without been screened .

He added that apart from the fact that there is Ebola, nobody comes into the country without being screened at Seme Border.

According to him, “Without Ebola nobody crosses the borders without going through Immigration checks. Therefore, anybody going out or coming into the country we sensitise them. On a serious note, we sensitise them that something like this is happening and if they don’t know please take note and take care of yourselves.”

On the Command’s preparedness and what is being done to put the officers in the Seme Boarder at alert as it concerns Ebola, he said, “As far as our officers are concerned everybody is conscious. We are prepared and we have sensitised our men about Ebola. If you go there now nobody will actually have direct contact with you without making sure you are not carrier. We told them and sensitise them about Ebola and that they should not trust anybody they see, don’t shake hands with anybody you see. Even if the person looks healthy because that is not a guarantee that he is not a carrier. The symptoms of Ebola cannot be seen immediately, it takes some time for it to manifest from outside. Therefore, a carrier can have it and you may not know. Nobody is trusted now as far as contact is concerned. “ The Ministry of Health, he said has not only assured him of collaboration on the Ebola but that it has also promised to provide all the necessary equipment as far as Ebola is concerned.

Liman stated that as far as Ebola was concerned the bulk of work lies with officials of Port Health, who use their infrared equipment to screen those entry into the country.

When Abelnewsng.com visited the Seme Border to observe what was going on in view of insinuations that no screening was going at the border, NIS officers were seen with medical hand gloves checking the travelling documents of those coming in through the board, while officials of Port Health were also seen with medical hand gloves in their hands and using infrared equipment to take the temperature of those coming into the country.

Also seen at their duty posts were officials of State Security Service (SSS) and other relevant agencies with medical hand gloves in the hands doing their constitutional jobs.

At Seme Border, Abelnewsng.com ran into a Nigerian Mr Arogundade Alex Ropo, from Ekiti State, who came into the country from Republic of Congo, said that he was screened at both Republic of Congo and Benin airports.

Speaking to the online platform shortly after going through NIS checks, he stated that he flew from Republic of Congo to Benin Republic and that at every point he was screened of the Ebola.

Another Nigerian, who simply identified himself as Ugochukwu coming into the country from Lome, Togo said that it only in Nigeria (Seme Border) that his temperature was taken, adding that there is no screening point at the border between Lome and Benin Republic.

Officials of Port Health, who spoke to Abelnewsng.com, said that they have been screening people coming into the country but that there are no cases of high temperature.

Meanwhile, Comptroller Liman has warned men under his command not extort money from either does arriving or departing the country using Seme Border, adding that anyone caught would have himself to blame.

He said that the Command has received several complaints about extortion at Nigeria’s borders and that the Comptroller General, Muhammed Babandede is not happy about it.

The CG, he said has warned and that officers of the organisation have obeyed, adding that NIS was doing its best to sanitise the institution.

According to him, “The Comptroller General is ready deal with ruthlessly with any officer found extorting money from people. For NIS anybody who does extort money from people is on his own.

He added that the command visited the Nigerian Custom Service and that NIS was assured that any NCS officer who extorts would be dealt with.

Liman also said that he has visited other agencies and they assured him of their cooperation.

Be the first to comment on "Immigration, Port Health, Others Ready For Ebola At Seme Border—Liman"