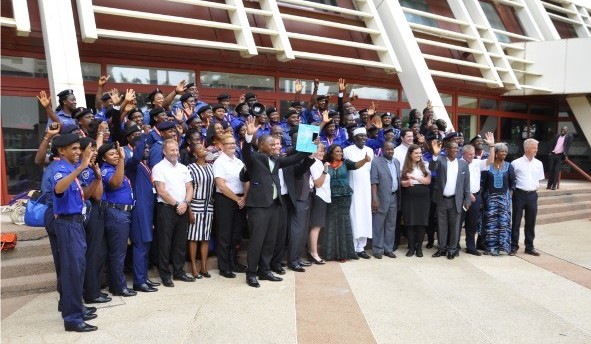 The Minister of State, Aviation, Sen. Hadi Sirika has said that he would empower the 35 Aviation Security (AVSEC) officers trained by United Nations in Abuja on counter terrorism.

An online statement issued by the Acting General Manager, Corporate Affairs, Mrs Henrietta Yakubu, informed that this at the graduation ceremony of 35 Aviation Security (AVSEC) officers held in Abuja, recently.

The four months training, which was organised by the Redline Assured Security, United Kingdom on Counter Terrorism was tagged ‘Train the Trainer Course 19’.

The Minister, who expressed a deep sense of fulfillment with the exercise, stated that he would continue to do everything within his powers to encourage and promote knowledge development in every facet of the industry.

He also promised to empower the graduands in every way legally possible, including equipping them with light arms.

On his part, the Managing Director, of the Federal Airports Authority of Nigeria(FAAN), Engr Saleh Dunoma has said that human capacity development is the surest way to meet the highest standards of professionalism and best industry practices.

This is just as he stated that continuous training and retraining of the agency’s staff in line with the provisions of the International Civil Aviation Organisation (ICAO).

Dunoma, who was represented at the event by the Director of Security Services, Group Capt. USA Sadiq admonished the graduating officers to efficiently apply this knowledge and make a personal commitment to excel in their chosen careers.

He also added that this career path is crucial especially because it bothers on safety and security of lives and properties.

Also speaking, the United Nations Resident Coordinator, Ad Interim, Mr. Mohammed Fall, who commended the Federal Government for her significant effort in improving AVSEC in the current context of the country.

He added that this would boost global confidence, especially in doing business with the country, adding that FAAN will continue to invest in its human resources, while congratulating all graduands for their excellent performance.

The highlight of the event was the presentation of certificates to the graduands by the Permanent Secretary, Ministry of Transportation.