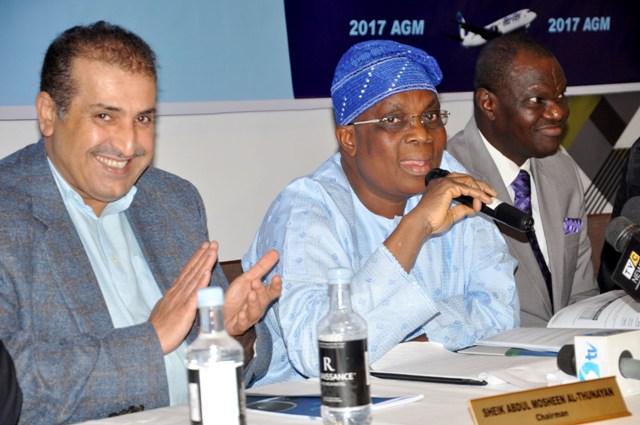 …Takes Delivery Of 2 Airplanes In The Next One Month

Med-View Airline PLC, the only airline in the country quoted on the Nigerian Stock Exchange (NSE) has stated that it made the highest revenue from its hajj operations compared to international and domestic operations.

The Chief Executive Officer of the airline, Alhaji Munir Bankole, made this known during the airline maiden Annual General Manager(AGM) at Renaissance Hotel , Ikeja Lagos recently .

This is just as the airline has projected a total of N35 billion for the year 2017.

Bankole, who also made this known, added that a dividend of 3 Kobo would be paid on every 50 Kobo ordinary to shareholders, hoping that the dividend would increase.

He added that the company is acquiring assets to further consolidate the business.

Fielding question from shareholders on the number of aircraft that that is owned by Med-View Airline , Bankole stated that four of the aircraft are owned by the airline 100 per cent, adding that in the next one month the airline will be taken delivery of two aircraft ; Boeing 777-200 series and Boeing 737—800 series

He stated that very soon, the company would be moving its corporate headquarters from the present location to No17 Bank Anthony Way.

The Chief Executive Officer stated that the company had made huge progress in view  of the fact that the airline with two leased aircraft in 2012 with a turnover of N3.6billion  now made a turnover of N25 .9 billion in 2017.

According to him, “There have been significant improvements in our finances over the years since we started scheduled flights in 2012 till date .The revenue of the company has shown an upward surge from N3.6 billion in 2012 to N25.9 billion in 2016. This is based on the dedication of staff and the environment provided by the management.”

He appealed to shareholders to be patient, as the management team of the airline has been in the industry for about 20 -30 years.

Stakeholders at the event commended the airline for going to the Nigerian Stock Exchange)(NSE)at a critical time of recession and for also given shareholders dividend of 3 Kobo per share first year after listing.

A stakeholder Boniface Okezie commended the airline for taken the courage to go into NSE advising Medview airline to go into public offer or right issue.

According to him, “If people are bold enough to come to NSE at a very difficult time, we must thank them.”

Be the first to comment on "Hajj Operations Generate More Revenue For Med-View Airline Compared To Int’l, Domestic—-Bankole"