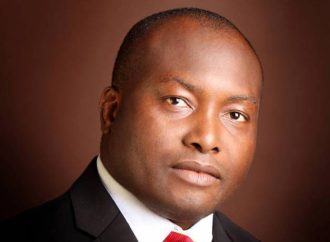 Recalled that the judge had on May 9, while granting an Ex-parte application filed and argued by Ubah’s lawyer, Mrs. Ifeoma Esom, ordered the DSS and its Director-General, to produce him in court on Friday, or show cause while he will not be produced.

However, at the hearing of the matter on Friday, Ubah’s lawyer, Prince Ajibola Oluyede, urged the court to order the immediate release of his client, Ubah, due to flagrant disobedience to the order of the court made on May 8.

In urging the court for immediate release of Ubah, Oluyede told the court that instead of the DSS to produce Uba as ordered by the court, the respondents served them with Notice of Preliminary Objection.

He also informed the court that the respondents went to a Federal Capital Territory (FCT) High Court and obtained a remand order of his client despite a Lagos Federal High Court order that he should be produce in court.

Furthermore, Oluyede told the court that in disobeying the court order the DSS and its Director-General acted in subversion to the authority and dignity of the court, by utilising what he termed as ‘abuse of court and power’.

Oluyede further told the court that when Ubah was first arrested in March 19, 2017 and released after three weeks that he was coerced to discontinued the fundamental rights application, which he earlier filed against the respondents, adding that upon discontinuance of the application he was invited and detained again.

Oluyede added that during Uba’s second arrest, he was coerced to signed documents that he owed Nigerian National Petroleum Corporation (NNPC) and to pledge with his assets for the debt, whereas, he was owed by NNPC to the tune of N14. 039, 125, 125 billion.

He submitted to that the DSS and its Director-General have not shown cause in compliance with court order while he should not be released.

Responding, lawyer representing the DSS and its Director-General, Mr. Peter Okerinmade, urged the court to discountenance the submissions made by Ubah’s legal team.

He told the court that the agency has filed an application before the court challenging the court’s jurisdiction to entertain Ubah’s application.

Okerinmade said the applicant was arrested in Abuja on May 6, 2017 and not in Lagos as claimed by Oluyede, adding that the agency secured a remand order of the applicant on May 10, 2017, this he said was sequel to a Ex-parte Motion for his remand filed before an Abuja Federal High Court.

He therefore urged the court to discountenance the submission made by Ubah’s lawyer and hear the agency’s notice of preliminary objection challenging Court’s Jurisdiction.

Justice Idris described the situation the court finds itself as sad and unfortunate.

The judge said, “on May 9, 2017, upon the hearing the applicant’s Ex-parte application, the court directed the fourth and fifth applicants to produce the applicant in court today.

“It’s clear that there is a direct conflict between order of this court and of my learned brother Halilu J of FCT High Court.

“Court of the same jurisdiction have been cautioned on a matter like this. I will in the circumstance of this case act with great caution. I will not make any order that will neutralise the effect of order made by High Court of FCT.

“In the line of order made on May 10, 2017, I will not make an order to produce the applicant since parties in the case have been served and matter adjourned till May 18, 2017, I shall adjourn till May 18, 2017, when all applications and Notice of Preliminary Objection shall be heared.

Dr. Ifeanyi Ubah, and his oil firm, Capital Oil and Gas, had instituted a fundamental right suit against the DSS and its Director-General, seeking his unconditional release from the custody of DSS

Ubah in affidavit in support of the ex-parte application deposed to by the Secretary of Capital Oil and Gas Limited, George Oranuba, claimed that NNPC and AMCON arrested Ubah on account of allegations.

Oranuba said the issue had become a subject of litigation, adding that despite the subsisting suit, EFCC and the DSS invited Ubah for questioning.

But the DSS had claimed that it arrested Ubah on alleged indebtedness to NNPC.