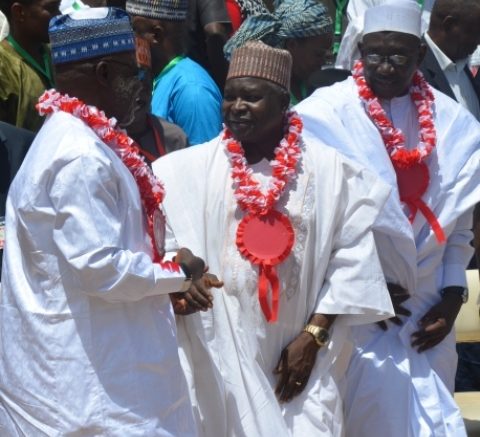 The Chairman Chief Executive of the National Drug Law Enforcement Agency (NDLEA) Col. Muhammad Mustapha Abdallah(rtd), Governor Simon Lalong of Plateau State and Governor Umaru Tanko Al-Makura of Nassarawa State have called on commanding officers of the agency to adopt new strategies and adopt innovative ideas that will rekindle fresh fire and prevent compromise in the fight against narcotic drugs and psychotropic substances in the country.

This call was made at the opening ceremony of commanders’ conference at the Regional Academy for Drug Control in Jos, Plateau State.

The conference with the theme, “Developing The Agency’s Strategies For Effective Implementation Of Government Drug Law Policy” is expected to address burning issues more holistically, intensively and extensively.

The Chief Host, Governor Lalong, who was represented by the deputy governor of Plateau State, Professor Sunni Tyoden said that in the search for solutions logistics must be provided, officers adequately trained and motivated to surmount temptations relating to compromise and lack of dedication.

In his words, “to be in charge is to be ahead of criminals and pursuing the three fold essentials of the method, machine and the man in the production line of service which must be comprehensively looked at in our proactive search for solutions”.

The special guest of honour, Governor Al-Makura, whose speech was presented by the Commissioner for Information, Culture and Tourism of Nassarawa State, Honourable Abdulhamid Yakubu Kwara noted that the state is partnering with the NDLEA to prevent social effects of drug abuse such as road accidents, loss of jobs, poor academic performance and instability in family.

“Government is collaborating with NDLEA through skill acquisition and youth empowerment programmes aimed at reducing drug trafficking and abuse” he stated.

Abdallah said that the agency whose function is integral to the achievement of government’s three-point agenda of security, economy and anti-corruption must begin to reinvent its strategies for effective implementation of Government Drug Law Policies.

“There is a nexus between effective drug control and a safer society devoid of socio-economic distortions. No matter how vibrant the drug law policy may be, if there are no corresponding clearly defined strategies for implementation, the policy will be sterile”. He said

Existing strategies should be complemented by the will and determination of command officers to embrace the change philosophy of the present administration which is predicated on the proper ways of doing things. Besides, recent trainings have been anchored on how to be proactive in both our operational and administrative approach to drug control.

Thinking and acting strategically is the only way we can be responsive and at the same time preventive in our onerous responsibility of securing Nigeria from drugs and its attendant criminalities.

We cannot afford to remain static when drug criminals are the most dynamic creatures with unfathomable modes of drug concealment uncover on a daily basis. Drug control is also experiencing paradigm shift in most parts of the world. We must go the whole hug to disrupt, dismantle and defeat them, if we have to give full expression to Government Drug Law Policy.

The present administration of President Muhammadu Buhari, GCFR has demonstrated sufficient political will to cure the Agency of its achilles’ hills, and also address related national challenges of unemployment and stifled economy. With the expansion of the agricultural space, there is now a wide range of alternative means of livelihood for drug merchants, a development that may lead to deceleration of the illicit business particularly cannabis cultivation.

The NDLEA boss added that there must be adequate consultation with relevant stakeholders in order to ensure a coherent and multi-sectorial platform for achieving the main goals of drug law policies.

Be the first to comment on "Abdallah, Lalong, Al-Makura Task NDLEA Commander On New Strategies"