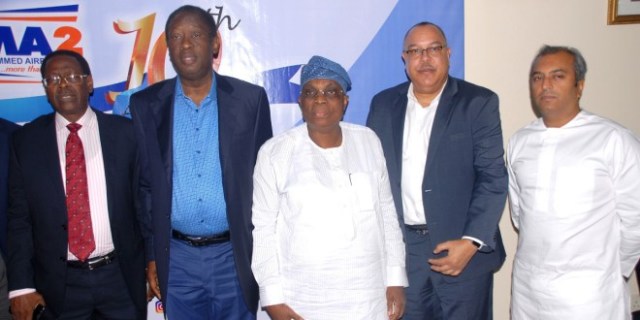 The Chairman of Resort Group, Dr Wale Babalakin has stated that the Murtala Muhammed Airport Terminal (MMA2) has carried over 20 million passengers, operated 400,000 flights and created 100,000 jobs in its 10 years of existence

This is just as he said categorically that the 22 airports in the country can be turned around if they are concessioned transparently and in accordance with the law.

He said this at a media conference to mark the 10th anniversary of MMA2,the only privately funded and managed airport terminal in the country.

Recalled that MMA2 was commissioned on May 7, 2007 by the former President Olusegun Obasanjo’s administration.

The Chairman commended the defunct Chanchangi Airline, who according to him was the first domestic carrier to operate flight from MMA2 terminal and others such as Medview and Dana Air that stood by the terminal all these years.

Chanchangi Airlines, he argued is one of the airlines the Federal Government should have assisted with intervention fund but was allowed to go into extinction without support.

As mark of respect, the chairman asked that a minute silence should be observed for the late Alhaji Ahmadu Chanchangi, who died recently.

Commending the airlines that have stood by the terminal further, he said, “Your effort is a demonstration that if we encourage the right person in Nigeria, we will achieve success.”

The Chairman said that he sympartise with domestic airlines that operates local flights from MMA2 but who also have to taxi to the international terminal burning aviation fuel to operate regional flights.

On why BI-Courtney Aviation Services Limited , the managers of MMA2 did not chose the option of dialogue to resolve the lingering concession issues as it concerns the terminal, the uncompleted hotel and the international conference centre instead of exploring the legal option, Babalakin said, Our first option was dialogue, dialogue and dialogue.” Taking a retrospective look at the issues, the chairman told journalists, airline chief Executive Officers, captains of industries and those who had come to celebrate with him on the 10th anniversary of the terminal that in 2008, the late President Shehu Yar Adua presided over the concession issue and that there and then it was resolved and that BASL was copied.

The Resort Group Chairman further explained that at a point, there was arbitration to try and resolve the concession issues, where BASL was represented by three person and the Federal Government three representatives.

Babalakin said that at the end of the day all the issues were resolved in favour of BASL including the 36 concession period, which all revenue should be paid to BASL that all domestic flights shall originate from MMA2 but that this arbitration was not obeyed.

“Like I said earlier, our first recourse was dialogue.”

MMA2, he explained was built on the premise that all domestic flights in Lagos must originate from MMA2 and that as soon as MMA2 was ready the Federal Government should close GAT.

But that surprisingly, the embattled Asset Management Corporation of Nigeria (AMCON) Arik Air started operating flight from GAT in total defiance of that premise.

He contended that the operation of domestic flights from the General Aviation Terminal (GAT)also known as Terminal One was a violation of the concession agreement.

On whether BASL is indebted to AMCON, he said, “In 2009 there was development on GAT and we went to court for damages seeing that BASL had the right to first option for that terminal’s development. In 2012, court ruled in our favour for damages of N132billion, everyone went to Appeal; Federal Government, FAAN, National Union of Air Transport Employees (NUATE), Air Transport Services Senior Staff Association of Nigeria (ATSSSAN), in all there were six appeals and all were dismissed. And based on a court resolution, it was agreed that since the Federal Government owed BASL and AMCON Is a parastatal of FG that the debt be taken from there. So based on Nigerian laws Bi-Courtney owes no dime to AMCON.”

He further argued that the resolution of the concession issues lies with the authorities, adding that, “those in authority should do the needful”

The Senior Advocate of Nigeria (SAN) said that the position of BASL on concession is that it must be done in accordance with the law.

According to him, “Our position on concession is very clear. It should be done with in line with the law .Anybody who invest infrastructure, healthcare, airlines loves Nigeria.

He continued, “We call on the regulating authority to honour concession agreement. It is the only way to appreciate our pioneering efforts. We welcome concession as long as it is done within the rule of law .No nation can achieve its full potential until it treats her citizens properly.”

On whether the terminal is making profit, he said, “It is difficult to make profit in this environment.”