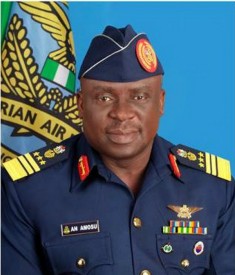 Owobo, the second prosecution witness in the ongoing trial of the former Airforce Chiefs, narrated before Justice Mohammed Idris how the trio diverted the sum of N3 billion received from Nigerian Maritime Safety and Administration Agency (NIMASA) and other monies received from different NAF accounts amounting to N5.9 billion for their personal used.

Owobo told the court that Vice Marshall Adigun and Commodore Gbadebo, who were the only signatories to NAF Special Emergency Operation account domiciled with Zenith Bank Plc, received the sum of N3 billion from NIMASA, which were paid in three tranches, between September 15, 23 and 29, 2014.

He said the transfer of the said N3 billion was as a result of approval of a Memorandum of Understanding (MOU) between NIMASA and NAF.

He stated that after each transfer of the first N1 billion on August 28, 2014, upon analysing the exhibit A3, which contained NAF’s statement of account, it was discovered that on September 2 and 4, 2014, there was various transfer of the money to Right Option Oil and Gas and Judal Oil and Gas Limited, in the tranches of N328 million, N336 million, N165. 790 million and N170.210 million.

He stated that upon inviting the two oil and gas companies’ Managing Director, in person of one Adegbite Adelakun, to explain how they came about the money, he told the Commission that he does not operate oil and gas company but deal in foreign exchange business, and that after collecting the money he took the Dollars equivalent to the account officer of NAF, who later gave the money to Commodore Gbadebo.

The witness also told that court that there was a transfer of the sum of N336 million to AAGBS Oil and Gas but the money was reversed to the NAF’s account due to disagreement on exchange rate.

Owobo who is an Investigator with EFCC said the second oil and gas company, Delfina Oil and Gas received the sum of N280.650 million, another N262.416 million and N480.920, while it transferred to McAllan oil and gas the sum of N243,919 million and N114.064 million, adding that from the Corporate Affairs Commission (CAC) documents they received it was revealed that the companies’ accounts was being operated by one Ayoka Esther and McAllan Adenike, while its accounting officer was Oshinsanmi Olufunke. And the documents also revealed that the Directors are: Jacob Fummi, Jacob Fredrick and Jacob Samuel.

The witness also stated that upon further investigation, it was discovered that the same passport photographs were used for the said Ayoka Esther and McAllan Olufunke, and that the second defendant, Air Vice Marshall Adigun admitted to have supplied the photographs and being the only operator of the account.

The witness also stated that between September 23 and 25, 2014, there were total transfer of the sum of N976 million from NAF’s account to Labol Oil and Gas Limited and that upon interrogating the Managing Director of Labol Oil and Gas Limited, he denied being into oil and gas business but said he deal in foreign exchange and that all the money he changed to US Dollars were given to Air Vice Marshall Adigun Gbadebo.

The witness stated that on further interrogation of the Labol Oil and Gas Limited Managing Director, he told his team that it’s because oil and Gas Company get unlimited threshold of amount they can transferred.

Owobo also said apart from money from NIMASA, there was a sum of N1 billion from NAF project account which was transferred from NAF headquarters to Skye Bank, and that the money was transferred to Delcon Installer, Namuduka Ventures Limited, Marab General Concept, and 7×7 Limited in the sum of N16. 980 million, N120.420 million and N17.2 million, N86 million respectively. While the sum of N23.020 million was withdraw in favour of Commodore Gbadebo.

The EFCC Witness further stated that on April 22, 2014, the sum of N120 million was paid by NAF Project account and the money was disbursed to Shawai Limited, Hebron Housing and Property Limited, the companies owned by James Bola Adigun, adding that the directors of the company’s account are: Ayoka Esther, Oladele James, and Ann Toluwalope, and that Vice Marshall Bola Adigun stated that he used James Oladele to operate Hebron’s account.

He also stated that the sum of N45.6 million was transferred to Gbemisola Ventures’ account with FCMB, which has link with Commodore Gbadebo,adding that all the CAC documents of Gbemisola Ventures’ were filled by Owodunni Olugbenga Gbadebo, who is the Managing Director/Chief Executive Officer.

From the Exhibit A4, which has been admitted by the count, the witness said Delfina Oil and Gas Limited owned by Commodore Adigun received about N10 billion from several NAF Projects accounts.

He also stated that one Omolara Omolola, who happened to be the wife of former Chief of Airforce and Director of Solomon Healthcare Services, also received several million from the NAF special project account which she used in buying equipments to the healthcare.

He also stated that the three defendants diverted several millions through Tripadize BDC, who in turn changed the money used in buying the equipment for Solomon Healthcare Services Limited.

However, the proceedings were brought to a halt, when the lawyers representing the defendants told the court that they can only response to the verification of the statements of their clients which were tendered by the prosecutor.

Consequently, the presiding judge, Justice Mohammed Idris, adjourned the matter till Wednesday, for continuation of trial.

Recalled that the witness, Owobo, had at last adjourned date told the Court, how Air Marshal Amosu, Adigun and Gbadebo diverted the sum of N3 billion meant for Security of country’s Maritime to his personal oil and gas companies.

Air Marshal Amosu, Air Vice Marshal Adigun, Air Commodore Owodunni Olugbenga and their eight companies, are being tried before the court by the EFCC over alleged N22.8 billion fraud.

The accused persons were first arraigned before the court on June 29, on 23 counts charge bordering on Fraud, money laundering, and stealing.

The offences are contrary to sections 18(a) of the Money Laundering (Prohibition) (Amendment) Act, 2012, and punishable under Section 15(3) of the same Act.

Be the first to comment on "Arms Gate: How Banks Aided Airforce Chiefs To Laundered N22.8B Through Fictitious Companies"